Effects of Urbanization Extend to the Global Scale

Scientists find that megacities will continue to leave large footprints 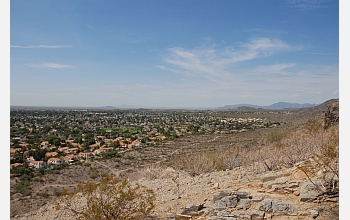 What shape could future cities take, and how will their human populations meet environmental and resource challenges?

A paper published this week in the journal Science, authored by Arizona State University (ASU) ecologist Nancy Grimm and colleagues, concludes that global change and the ecology of cities are closely linked. The research was funded by the National Science Foundation (NSF).

"When we think of global change, images of melting ice caps and pasture replacing tropical rainforest come to mind," said Grimm. "What drives these changes?"

"In fact, much of the current environmental impact originates in cities. With the increasing transition to city life, the urban footprint is likely to continue to grow."

Not all changes that occur in the city stay in the city, Grimm and colleagues have found. Rural landscapes at a city's edge show changes in soils, human settlements, the diversity of plant and animal species and nearby ecosystems.

Cities are substantive ecosystems in their own right, replete with complex human-environmental interactions and increasing and far-reaching impacts, Grimm and co-authors write.

Other authors are ecologists John Briggs, Stan Faeth, and Jianguo (Jingle) Wu of the ASU School of Life Sciences; archaeologist Charles Redman, director of the ASU School of Sustainability; and researchers Nancy Golubiewski from the New Zealand Centre for Ecological Economics and Xuemei Bai of CSIRO Sustainable Ecosystems in Australia.

"People in cities increasingly dominate environmental change on a global level, but humans' effects are understudied from an ecological standpoint," said Henry Gholz, program director in NSF's Division of Environmental Biology. "This lack of knowledge hampers our ability to make informed predictions of, and policies regarding, the environment of the future."

Urban challenges increasingly face communities world-wide, with solutions lagging behind, according to Grimm. In this paper, she and other scientists take a global perspective on urban development.

Their analyses capture some of the commonalities that face future city planners and societies, viewing cities as both drivers of and responders to environmental change. The authors chart the socioecological challenges and changes ahead for all cities, but particularly those in rapidly developing regions like China and India.

The changes ahead are associated with issues ranging from land use to urban waste discharge to heat effects, as well as challenges related to larger changes in global climate, hydrologic systems, biodiversity and biogeochemical cycles.

"The research discussed in this paper is especially noteworthy because it deals with humans as an integral part of the broader environment," said Thomas Baerwald, program director in NSF's Division of Behavioral and Cognitive Sciences.

"Cities, and the people in them, will ultimately determine global biodiversity and ecosystem functioning," added Wu.

Phoenix is the fifth largest city in the United States, with an estimated population of 1.5 million. The West in general is expected to experience the largest population increases in the U.S. in the next 20 years.

With rising numbers of residents and increasing demands for land, power, water, waste removal and transportation, Phoenix, site of the Central Arizona-Phoenix Long-Term Ecological Research (LTER) project, with which Grimm and several co-authors are affiliated, provides a "before" and "after" laboratory.

"Landscapes, virtually anywhere in the world, will experience the impact of the growth of nearby and distant cities," Redman said. "We need to understand the complexity of impacts that rapid global urbanization has--both within urban boundaries and across landscapes farther away."

How can multiple environmental changes be considered in a unified way? One recent approach has been to view urban systems as organic units: organisms that take up resources and produce wastes.

Such an integrated perspective can be useful for interpreting biogeochemical cycles in cities, and analyzing their regional and global effects. For example, cities are sources of carbon dioxide and other greenhouse gases, and human-caused nutrient deposition.

"Cities create novel biological communities," said Faeth, "and these communities, no matter how 'unnatural' they are, are the ones that most humans now, and in the future, will experience."

Studies of urban ecology offer critical insights into how we might best reach a sustainable urban future, said Grimm.

"The field of urban ecology has demonstrated that well-designed cities can have less overall impact on the environment than equivalent rural populations," said Jonathan Fink, director of ASU's Global Institute of Sustainability. "The research results in this paper show that an ecological perspective can help urban planners and engineers find ways for society to live more harmoniously with nature."