Insights into the workings of the flagellum may advance nanotechnology 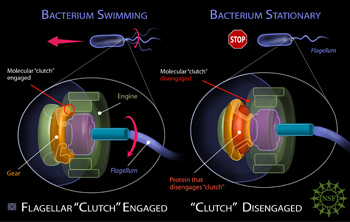 A bacterium releases a protein (red) that disengages the clutch on its flagellum.

An improved understanding of how flagella work may give nanotechnologists ideas about how to regulate tiny engines of their own creation. The flagellum is one of nature's smallest and most powerful motors. The flagellum of some bacteria can, for example, rotate more than 200 times per second, driven by 1,400 piconewton-nanometers of torque. That's quite a bit of (miniature) horsepower for a machine whose width stretches only a few dozen nanometers.