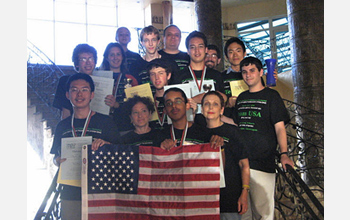 The U.S. team shows their awards at the 2008 International Linguistics Olympiad in Bulgaria.

The summer games in Beijing may have just gotten underway, but the United States can already claim gold medal bragging rights. The sixth International Linguistics Olympiad ended today in Slanchev Bryag, Bulgaria, and U.S. high school students captured 11 out of 33 awards, including gold medals in individual and team events. This was only the second time the U.S. has ever competed in the event. Their achievement brings a new focus on computational linguistics.

This year's Olympiad featured 16 teams from around the world, including Bulgaria, Estonia, Germany, Latvia, the Netherlands, Poland, Russia, Sweden, South Korea and Slovenia. Each problem presented clues about the sounds, words or grammar of a language the students had never studied, such as Micmac, a Native American language spoken in Canada, the New Caledonia languages of Drehu and Cemuhi, as well as several historical Chinese dialects. They were then judged by how accurately and quickly they could untangle the clues to figure out the rules and structures of the languages to solve the problem.

The National Science Foundation initiated the North American Computational Linguistics Olympiad (NACLO), and together with major contributions from the North American chapter of the Association for Computational Linguistics, Google, Carnegie-Mellon University's Leonard Gelfand Center for Outreach, and the University of Michigan, helped fund NACLO's activities this year, along with other support from Cambridge University Press, Just Systems Evans Research, M*Modal, Powerset and Vivisimo.

Aside from being a fun intellectual challenge, the Olympiad mimics the skills used by researchers and scholars in the field of computational linguistics, which is increasingly important for the United States and other countries. Using computational linguistics, these experts can develop automated technologies such as translation software that cut down on the time and training needed to work with other languages, or software that automatically produces informative English summaries of documents in other languages or answer questions about information in these documents. In an increasingly global economy where businesses operate across borders and languages, having a strong pool of computational linguists is a competitive advantage. With threats emerging from different parts of the world, developing computational linguistics skills has also been identified as vital to national defense in the 21st century.

The participants, their families and many private individuals also made contributions to bring the team to Bulgaria for the Olympiad. The U.S. teams were led by head coach Dragomir Radev, associate professor of computer science, information, and linguistics at the University of Michigan, and associate coach Lori Levin, co-chair of NACLO and associate research professor in the Language Technologies Institute at Carnegie Mellon University. Adam Hesterberg, who achieved the highest individual score in last year's Olympiad and is currently attending Princeton University, was present this year as an assistant coach. The team was also accompanied by National Board Certified Teacher Amy Troyan, who also serves as gifted program coordinator at Taylor Allderdice High School.

Other NACLO organizers who did not go on the trip include Tom Payne, NACLO co-chair, University of Oregon; James Pustejovsky, a professor of computer science at Brandeis University; Pat Littell, graduate student at the University of Pittsburgh; and Mary Jo Bensasi, who helped provide administrative support to the project.

"It has truly been exciting to watch our students prepare for this competition and interact with each other," Troyani said. "They seem to thrive on the opportunity to share their love of linguistics and learning with other students who have the same passions. This is an incredible and inspiring group of young people."

Levin described this year's delegation as "brilliant young people who live and breathe languages, linguistics, and problem solving. I already feel like they are colleagues."

The U.S. delegation was selected from over 750 high school students who participated in NACLO qualifying events held at 77 sites around the U.S. and Canada this past winter.