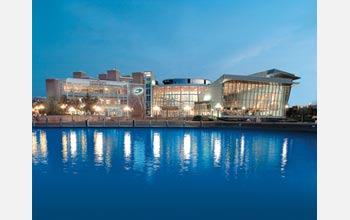 The Maryland Science Center in Baltimore will be the focal point of a range of public events April 4 and 5 that highlight federally funded Arctic and Antarctic research programs. The public events are being held in conjunction with a meeting on the international treaty governing international cooperation and scientific research in Antarctica.

The Science Center events will include an unprecedented exhibit of collected art, film, poetry and prose created by world-class artists to interpret the nation's Antarctic heritage, the public unveiling of a unique film that shows the global importance of the world's Polar Regions to multimedia and hands-on demonstrations of polar science and cultures. The science center events are scheduled in conjunction with a two-week-long Antarctic Treaty Consultative Meeting (ATCM), attended by delegates from more than 40 countries.

The exhibit and many of the related events are  funded jointly by the National Science Foundation's (NSF) Office of Polar Programs (OPP) and its Education and Human Resources Directorate's Informal Science Education (ISE) program. NSF manages the U.S. Antarctic program, which coordinates all U.S. research on the southernmost continent. NSF's director also chairs the Interagency Arctic Research Policy Committee (IARPC).

The programs are designed to give the public, including young children, a glimpse into both the lives of those who make their homes in the Polar Regions and those who conduct cutting-edge science there. They also focus attention on the importance of U.S. government-supported polar research-in fields as diverse as climate sciences, oceanography, and astrophysics-in a global context.

The Maryland Science Center at Baltimore's Inner Harbor was named one of the nation's ten best science centers for families" by Parent's Magazine in 2008. It is visited by 500,000 people annually.

The weekend also will highlight the uniqueness and importance of the Antarctic Treaty.

The Treaty-which was signed in the U.S. 50 years ago-begins with the words "recognizing that it is in the interest of all mankind that Antarctica shall continue forever to be used exclusively for peaceful purposes ..." It uniquely guarantees freedom of scientific investigation on the southernmost continent. Treaty protocols also prohibit such activities as oil and gas and mineral exploration. The Treaty was also the first multilateral arms-control agreement, banning nuclear explosions and military activity.

This Treaty meeting will also be unusual because it will be attended by senior diplomats and scientists from the Arctic Council nations, many of which are also parties to the Antarctic Treaty. Significantly, the meeting will convene a century to the day after Maryland-born Arctic explorer Matthew Henson, an African-American, became the first person to reach the North Pole.

The Baltimore meeting also occurs at the official close of the International Polar Year (IPY), which concentrated deployment into the polar regions by scientists from more than 60 countries, NSF was the lead U.S. agency for IPY, in which many federal agencies, such as the National Aeronautics and Space Administration (NASA); and the National Oceanic and Atmospheric Administration (NOAA) participated.

The U.S. Department of State is organizing the Baltimore meeting, the 32nd since the Treaty was signed, but only the first in the United States since the 1970's. The working meeting, which is being held at the Baltimore Convention Center, is closed to the public.

Other federal agencies including NSF, which manages the U.S. Antarctic Program, NASA and NOAA planned and executed the public-outreach events.

The activites are open to the public and are free of charge with paid admission to the Maryland Science Center. The weekend events include: