The Science Behind "Angels and Demons" Is No Laughing Antimatter

Particle physicists to brief media and public on real science at CERN; May 19, 1 p.m. EDT 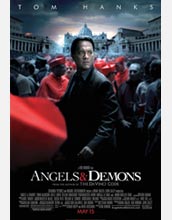 On May 15, 2009, Sony Pictures will release "Angels and Demons," and bring the world's largest particle physics laboratory to the silver screen.

Based on Dan Brown's best-selling novel, this major motion picture, starring Tom Hanks and directed by Ron Howard, focuses on a plot to destroy the Vatican using a small amount of antimatter. That antimatter is made using the Large Hadron Collider (LHC) and is stolen from the European particle physics laboratory CERN. Parts of the movie were filmed at CERN.

Embracing this opportunity to discuss the real science of antimatter, the LHC and particle physics research, on May 19, 2009, the National Science Foundation (NSF) will host a live media briefing spotlighting three world-renowed physicists.

This NSF live teleconference briefing is part of a larger effort in which, worldwide, scientists working on experiments at the LHC will host lectures and other "Angels & Demons"-related events for members of the press and the public. More than 45 lectures are taking place across the United States, Canada and Puerto Rico as part of the series "Angels and Demons: The Science Revealed". Events are also planned in particle physics institutions across Europe, Asia, Central and South America. For more information on the LHC, visit CERN's Web site.

* U.S. participation in the Large Hadron Collider project is supported by the Department of Energy's Office of Science and the National Science Foundation.