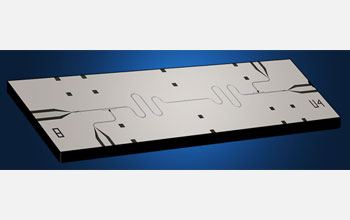 The two-qubit processor resembles a conventional computer chip and is able to run simple algorithms.

A team led by Yale University researchers has successfully implemented simple algorithms using a quantum processor based on microwave solid-state technology--similar to that found in computers and cell phones. The new processor is far from conventional, however, in that it uses the potent power of quantum mechanics to bring the dream of quantum computing a small but significant step closer to reality.

The work was supported in part by the Yale Center for Quantum and Information Physics (CQUIP), funded by a grant from the National Science Foundation's Division of Materials Research and Division of Physics, and by the Army Research Office and National Security Agency. The findings were published online in the June 28 issue of Nature.

"Our experiment can only perform a few very simple quantum tasks, which have been demonstrated before using other systems such as photons, trapped ions, and nuclear magnetic resonance," said Robert Schoelkopf, a principal investigator and professor of applied physics and physics at Yale. "But this is the first time it has been done in an all-electronic device, which looks and feels much more like a regular microprocessor."

The team used artificial atoms as quantum bits, or qubits. Although made from over a billion aluminum atoms in a superconducting electronic circuit, these qubits behave as single atoms. The difference is that the manufactured atoms are much larger and therefore easier to control than single atoms or other types of qubits.

Just like a single atom, an artificial atom can be stimulated into different energy states, akin to the "on" and "off" states of the bits in conventional computers. But following the counterintuitive laws of quantum mechanics, the scientists can also place these artificial atoms in "superpositions" of quantum states-both "off" and "on" at the same time. This wider variety of possible states allows for greater information storage and processing power.

As an example, imagine searching through a set of four phone numbers, including one for a friend, without knowing which number belonged to the friend. "It's like being able to place one phone call that simultaneously tests all four numbers, but only goes through to the right one," Schoelkopf said.

To perform this kind of "reverse phone book" search, the scientists used logic gates made from two qubits, which communicated with one another using a "quantum bus" design previously developed by members of the team.

"We had done some earlier experiments that connected two artificial atoms in a resonant cavity bus, which is basically a microwave transmission wire," said Schoelkopf. "The setup is analogous to two hydrogen atoms held between shiny mirrors--when they emit an ultraviolet photon, it bounces back and forth between the mirrors. In the same way, a microwave photon bounces back and forth between the two qubits, transmitting information to each other along the bus."

According to DiCarlo, the key building blocks included: local tuning of qubits on nanosecond timescales, which enabled the researchers to switch the interaction between the qubits "on" and "off" abruptly; a joint readout scheme that efficiently details two-qubit correlations; and state-of-the-art coherence times of about 1 microsecond for both qubits.

"There have been several earlier instances of two-qubit logic gates, but to do a quantum computation, you need to be able to control single qubits, and you also need to be able to make two qubits interact," said Schoelkopf. "With this experiment we don't just operate one gate; we string together 10 one-qubit gates and 2 two-qubit gates."

Solving simple problems such as the reverse phone book search using solid-state qubits hasn't been possible until now, in part because scientists couldn't make the qubits coherent for long enough to get to the solution. But with their quantum bus design, the team was able to keep the qubits stable for up to a microsecond.

"Both qubits in the two-qubit gates have to work at the same time, so you have to be able to reliably make two qubits with long coherence times," added Steve Girvin, co-author of the paper and co-principal investigator. We used a charge-based qubit, which normally would be sensitive to electrical noise. But we developed one that stays insensitive to noise for a long time, up to 3 microseconds."

"There's a tension between using larger-scale manmade systems like ours as qubits, which are easier to make, test and control, versus using individual atoms, which stay coherent longer, but are much more difficult to couple together in complex ways," said Schoelkopf.

"But there's an advantage to using a superconducting circuit, which is all controlled electronically," he said. "The goal is to make a scalable device, with thousands and thousands of qubits working together.  This is still a long way off, but the idea of using standard integrated circuit technology makes it easier to imagine that it might be possible someday."

Although the quantum processor itself must be kept just above absolute zero in order to maintain the superconducting properties of the circuit, DiCarlo said that the rest of the system looks like a typical processor, with only wires going into the system and wires coming out.

But Schoelkopf cautions it will still be some time before solid-state quantum computers become the industry standard. "The work we have ahead in the future is one of continuing to improve coherence times and increasing the number of qubits in the register, knowing that the power of the processor will grow exponentially with each added qubit," he said.

"I'm relatively optimistic that we should be able to combine three or more qubits soon," Schoelkopf said. "But to make a system which will actually perform computations on your laptop would take a thousand qubits. It's hard to see that far into the future, but this experiment is a significant step forward."