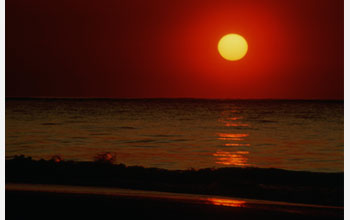 Establishing a key link between the solar cycle and global climate, research led by scientists at the National Science Foundation (NSF)-funded National Center for Atmospheric Research (NCAR) in Boulder, Colo., shows that maximum solar activity and its aftermath have impacts on Earth that resemble La Niña and El Niño events in the tropical Pacific Ocean.

The research may pave the way toward predictions of temperature and precipitation patterns at certain times during the approximately 11-year solar cycle.

"These results are striking in that they point to a scientifically feasible series of events that link the 11-year solar cycle with ENSO, the tropical Pacific phenomenon that so strongly influences climate variability around the world," says Jay Fein, program director in NSF's Division of Atmospheric Sciences. "The next step is to confirm or dispute these intriguing model results with observational data analyses and targeted new observations."

The total energy reaching Earth from the sun varies by only 0.1 percent across the solar cycle. Scientists have sought for decades to link these ups and downs to natural weather and climate variations and distinguish their subtle effects from the larger pattern of human-caused global warming.

Building on previous work, the NCAR researchers used computer models of global climate and more than a century of ocean temperature to answer longstanding questions about the connection between solar activity and global climate.

The research, published this month in a paper in the Journal of Climate, was funded by NSF, NCAR's sponsor, and by the U.S. Department of Energy.

"We have fleshed out the effects of a new mechanism to understand what happens in the tropical Pacific when there is a maximum of solar activity," says NCAR scientist Gerald Meehl, the paper's lead author. "When the sun's output peaks, it has far-ranging and often subtle impacts on tropical precipitation and on weather systems around much of the world."

The new paper, along with an earlier one by Meehl and colleagues, shows that as the Sun reaches maximum activity, it heats cloud-free parts of the Pacific Ocean enough to increase evaporation, intensify tropical rainfall and the trade winds, and cool the eastern tropical Pacific.

The result of this chain of events is similar to a La Niña event, although the cooling of about 1-2 degrees Fahrenheit is focused further east and is only about half as strong as for a typical La Niña.

Over the following year or two, the La Niña-like pattern triggered by the solar maximum tends to evolve into an El Niño-like pattern, as slow-moving currents replace the cool water over the eastern tropical Pacific with warmer-than-usual water.

Again, the ocean response is only about half as strong as with El Niño.

True La Niña and El Niño events are associated with changes in the temperatures of surface waters of the eastern Pacific Ocean. They can affect weather patterns worldwide.

The paper does not analyze the weather impacts of the solar-driven events. But Meehl and his co-author, Julie Arblaster of both NCAR and the Australian Bureau of Meteorology, found that the solar-driven La Niña tends to cause relatively warm and dry conditions across parts of western North America.

More research will be needed to determine the additional impacts of these events on weather across the world.

"Building on our understanding of the solar cycle, we may be able to connect its influences with weather probabilities in a way that can feed into longer-term predictions, a decade at a time," Meehl says.

But establishing a physical connection between the decadal solar cycle and global climate patterns has proven elusive.

One reason is that only in recent years have computer models been able to realistically simulate the processes associated with tropical Pacific warming and cooling associated with El Niño and La Niña.

With those models now in hand, scientists can reproduce the last century's solar behavior and see how it affects the Pacific.

To tease out these sometimes subtle connections between the sun and Earth, Meehl and his colleagues analyzed sea surface temperatures from 1890 to 2006. They then used two computer models based at NCAR to simulate the response of the oceans to changes in solar output.

They found that, as the sun's output reaches a peak, the small amount of extra sunshine over several years causes a slight increase in local atmospheric heating, especially across parts of the tropical and subtropical Pacific where Sun-blocking clouds are normally scarce.

That small amount of extra heat leads to more evaporation, producing extra water vapor. In turn, the moisture is carried by trade winds to the normally rainy areas of the western tropical Pacific, fueling heavier rains.

As this climatic loop intensifies, the trade winds strengthen. That keeps the eastern Pacific even cooler and drier than usual, producing La Niña-like conditions.

Although this Pacific pattern is produced by the solar maximum, the authors found that its switch to an El Niño-like state is likely triggered by the same kind of processes that normally lead from La Niña to El Niño.

The transition starts when the changes of the strength of the trade winds produce slow-moving off-equatorial pulses known as Rossby waves in the upper ocean, which take about a year to travel back west across the Pacific.

The energy then reflects from the western boundary of the tropical Pacific and ricochets eastward along the equator, deepening the upper layer of water and warming the ocean surface.

As a result, the Pacific experiences an El Niño-like event about two years after solar maximum. The event settles down after about a year, and the system returns to a neutral state.

"El Niño and La Niña seem to have their own separate mechanisms," says Meehl, "but the solar maximum can come along and tilt the probabilities toward a weak La Niña. If the system was heading toward a La Niña anyway," he adds, "it would presumably be a larger one."