The fossil primate Darwinius and a new find, Afradapis, are not related to humans 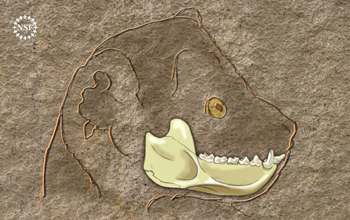 About 40 miles outside Cairo, Egypt, National Science Foundation (NSF)-supported paleontologists from three American universities are revealing features of a newly discovered African primate and solving a riddle about humankind's evolutionary past.

Lead researcher Erik Seiffert of New York's Stony Brook University and his colleagues say their find has the potential to clear up a portion of the human evolutionary tree by resolving the location of a misplaced species.

"The recently described fossil Darwinius, originally recovered from a disused quarry near Messel, Germany in the 1980s, has been widely publicized as an important 'link' in the lineage to higher primates," said Seiffert. He and his research team recently discovered a lemur-like relative of Darwinius in Africa that they named Afradapis and analyzed its place in primate evolution.

"Our study results indicate that Darwinius and its now extinct relatives, including Afradapis, are not in the evolutionary lineage leading to monkeys, apes, and humans as has been debated," he said. "Instead they are more closely related to the living lemurs and lorises."

They report the finding in the October 20 issue of the journal Nature. NSF supports the research through its social, behavioral and economic sciences directorate's physical anthropology program.

They first discovered a poorly-preserved Afradapis fossil, a fragment that showed features of the front teeth and jaw bone that were almost identical to those of later Old World monkeys. But it didn't make sense to the researchers that a member of that primate lineage would have been present in Africa at such an early time period, about 37 million years ago.

Soon they recovered additional Afradapis fossils and through dental analysis eventually clarified that Afradapis and Darwinius weren't in the line of Old World monkeys, apes and humans, but had concurrently evolved similar features with their distant relative, a type of anthropoid.

"The similar features evolved through the process of convergent evolution," Seiffert explained. "This means that under similar selection pressures, both lineages came to have similar specializations, but these features were not present in their last common ancestor."

Noted shared specializations from dental examinations include fusion of the two halves of the jaw, reduction and loss of the first few premolar teeth, and the presence of front incisors that are each shaped like a spatula, rather than being shaped more like a cone.

Interestingly, the ancestors of Old World monkeys, apes, and humans developed these features millions of years later, long after Afradapis and Darwinius were extinct. But, reconstructing the most likely family tree of both living and extinct primates, taking into consideration virtually all available anatomical evidence, the paleontologists determined that Darwinius, and its relative Afradapis, are not in the direct evolutionary line with humans.

"Our discoveries certainly contribute to a growing body of evidence that indicates that convergent evolution was a common phenomenon in early primate evolution," Seiffert said.