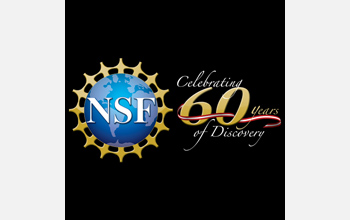 President Truman signed the law creating the National Science Foundation on May 10, 1950.

The National Science Foundation began its commemoration of its 60th anniversary today with a special presentation of anniversary-related activities and multimedia projects to the National Science Board. The activities highlight NSF's 60 years of service to the nation while looking forward to the scientific and technological challenges that still lie ahead.

"The occasion of NSF's 60th anniversary is an opportunity to take a brief moment from our current day-to-day projects and reflect on what we've accomplished and what lies ahead," said NSF Director Arden L. Bement.

Each year, NSF receives over 45,000 competitive requests for funding, and makes over 11,500 new funding awards. The agency's funding reaches all 50 states through grants to nearly 2,000 universities and institutions. NSF is the funding source for approximately 20 percent of all federally supported basic research conducted by America's colleges and universities. NSF also awards over $400 million in professional and service contracts yearly. Although the agency's workforce totals about 1,700, it's estimated that more than 200,000 people, including academic and small business researchers, graduate students and teachers at all levels, are involved in NSF programs and activities nationwide.

Among the items presented to the NSB in honor of the 60th anniversary was a collection of 60 important discoveries and innovations that NSF played a crucial role in creating. The so-called "Sensational 60" covers a wide range of scientific disciplines and specialties, and includes technologies such as functional MRI scanners in hospitals and the Google search engine, as well as research areas such as the theory of dark matter and efforts to understand what happened the moments after the big bang. All of the Sensational 60 items are described at a new website.

In his formal budget request to Congress this past February, President Obama laid out some of those future challenges, including transforming our nation's energy systems, improving scientific education and training and understanding global climate change.

"We have made many contributions to the pursuit of scientific discovery and to America's social and economic well being," Bement stated, "and we look forward to our continuing work advancing and supporting creative ideas and innovative approaches to research and learning."