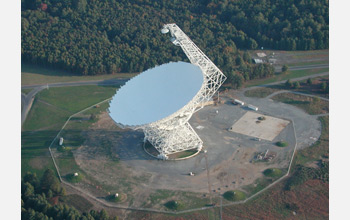 Using the world's largest, fully steerable radio telescope--the National Science Foundation's Robert C. Byrd Green Bank Telescope (GBT) in W.Va.--an international team of researchers has given astronomers the promise of a new tool for mapping the universe and gaining valuable clues about the nature of the mysterious "dark energy" believed to constitute nearly three-fourths of the universe's mass and energy. "Intensity Mapping" offers the potential for significant contributions to the field and further discovery. This research is detailed in the July 22 issue of the journal Nature.

In the matter-energy soup of the extremely early universe, sound waves are thought to have left detectable imprints on the large-scale distribution of galaxies. The researchers developed a way to measure such imprints by observing the radio emission of hydrogen gas. Their technique, called intensity mapping, when applied to greater areas of the universe, could reveal how such a large-scale structure has changed over the last few billion years, giving insight into which theory of dark energy is the most accurate.

The National Radio Astronomy Observatory (NRAO) Chief Scientist Chris Carilli, who was not part of the research team, commented on the research in the News and Views section of Nature's July 22 issue in a piece titled, "Broad-brush Cosmos: An innovative way of mapping the large-scale structure in the universe sidesteps the need to observe millions of gallaxies individually. The approach holds promise for both astroyphysical and cosmological studies."

"This is a demonstration of an important technique that has great promise for future studies of the evolution of large-scale structure in the Universe," said Carilli.

The researchers used the GBT to study a region of sky that previously had been surveyed in detail in visible light by the Keck II telescope in Hawaii. This optical survey used spectroscopy to map the locations of thousands of galaxies in three dimensions. Instead of looking for hydrogen gas in these individual, distant galaxies--a daunting challenge beyond the technical capabilities of current instruments--the team used the GBT to find and map the hydrogen gas in many galaxies at once. This gave them a picture of the "cosmic web" of large-scale structure.

To address inherent observational challenges, the astronomers developed new techniques that removed both man-made radio interference and radio emission from more-nearby astronomical sources, to leave the extremely faint radio waves coming from the very distant hydrogen gas. The result was a map of part of the "cosmic web" that correlated neatly with the structure shown by the earlier optical study.

Bandura, a CMU graduate student and beneficiary of the NRAO student support program for observing on the GBT, stayed up all night and collected the data. NSF funds the NRAO, operated under a cooperative agreement by Associated Universities, Inc.