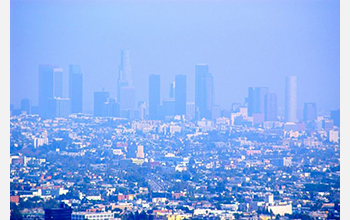 Recent experiments have improved the ability of scientists to predict ozone levels.

A team of scientists has, for the first time, completely characterized an important chemical reaction that is critical to the formation of ground-level ozone in urban areas. The team's results indicate that computer models may be underestimating ozone levels in urban areas during episodes of poor air quality (smoggy days) by as much as five to 10 percent.

Ground level ozone poses significant health hazards to people, animals and plants; is the primary ingredient of smog; and gives polluted air its characteristic odor. It is known that even small increases in ozone concentrations can lead to increases in death from respiratory problems. Because of the health hazards caused by ozone exposure, the research team's results may have regulatory implications.

The team's research, which was funded by the National Science Foundation (NSF), NASA and the California Air Resources Board CARB), appears in the October 29 issue of Science.

Big role of one reaction in predicting ozone in smoggy air

The reaction studied by the researchers plays an important role in controlling the efficiency of a sunlight-driven cycle of reactions that continuously generates ozone. In this reaction, a hydroxyl radical (OH) combines with nitrogen dioxide (NO2), which is produced from emissions generated by vehicles, various industrial processes and some biological processes.

Although scientists have long recognized the importance of the formation of nitric acid, they have, until now, been unable to agree on the speed, or "rate," at which hydrogen radicals and nitrogen dioxide combine to form this end product. "This reaction, which slows down ozone production, has been among the greatest sources of uncertainty in predicting ozone levels," said Mitchio Okumura of the California Institute of Technology--a member of the research team.  This uncertainty has affected computer models that simulate air pollution chemistry.

But through experiments conducted at the Jet Propulsion Laboratory (JPL) and at the California Institute of Technology using state-of-the-art techniques, Okumura and his colleague, Stanley P. Sander at JPL, led a team of researchers that accurately measured: 1) the overall speed at which hydroxyl radicals and nitrogen dioxide combine, or react, in given atmospheric conditions; 2) the ratio of stable nitric acid to unstable nitric acid that is formed under given atmospheric conditions.

In addition, new laser methods enabled researchers to directly detect the presence of the unstable form of nitric acid in microseconds. And with the help of companion calculations performed at Ohio State by Anne McCoy, they could quantify its yield as soon as it was formed.

To demonstrate the significance of the new results, modelers on the research team led by Robert Harley and William Carter fed their newly quantified reaction rates and ratios into computer models to predict levels of ground-level ozone during the summer of 2010 in the Los Angeles Basin. Their results indicate that many current models have been underestimating ground-level ozone levels in the most polluted areas (where nitrogen dioxide is highest) by about 5 to 10 percent. The research team concluded that relatively small changes in the rates and proportions of reactions forming unstable and stable nitric acid could lead to small but significant changes in ground-level ozone levels.

The importance of the study

"The study illustrates the importance of developing new and improved experimental approaches that interrogate atmospheric systems at the molecular level with high accuracy," said Zeev Rosenweig, an NSF program officer. "This is imperative to reducing uncertainties in atmospheric model predictions."

"The determination of a more accurate value of the rate of nitric acid formation from a hydroxyl radical and nitrogen dioxide will be important in future air-quality modeling," said Anne B. McCoy, a member of the research team. "The research was made possible by bringing together several laboratories with different capabilities and expertise, including my lab at Ohio State, and labs at CalTech, JPL and Berkeley."

The ozone prediction models incorporated into the research team's study are similar to those used by regulatory agencies, such as the Environmental Protection Agency and the California Air Resources Board. Therefore, the team's results may have implications for future predictions of ground-level ozone used by regulatory agencies in developing air quality management plans.