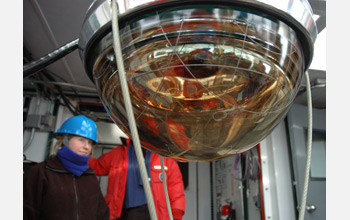 The National Science Foundation has signed a five-year, $34.5-million agreement with the University of Wisconsin-Madison to operate a unique telescope--a cubic kilometer in volume--buried in the Antarctic ice sheet between 1,400 meters and 2,400 meters deep.

The collaborative agreement covers the cost of operating the IceCube Neutrino Observatory, located in the ice under the U.S. Amundsen-Scott South Pole Station. The observatory records the rare collisions of neutrinos, elusive sub-atomic particles, with the atomic nuclei of the water frozen into ice. Neutrinos come from the sun, cosmic rays interacting with the Earth's atmosphere, and dramatic astronomical sources such as exploding stars in the Milky Way and other distant galaxies. Trillions of neutrinos stream through the human body at any given moment, but they rarely interact with regular matter, and researchers want to know more about them and where they come from.

IceCube is the world's largest neutrino detector. The size of the detector is important because it increases the number of potential collisions that can be observed, making neutrino astrophysics a reality. The observatory is slated for completion in December 2010.

While the Observatory is managed by the University of Wisconsin-Madison and primarily funded by the U.S. National Science Foundation, Germany, Belgium and Sweden contributed to its construction. More than 250 scientists from 36 institutions in the U.S., the partner countries, and elsewhere are now analyzing the data collected by the observatory.

"The IceCube detector is a superb example of the kind of exciting "big science" at the frontiers of knowledge that is ideally suited for support by the U.S. Antarctic Program, precisely because it could be built nowhere else in the world but in the Antarctic ice sheet," said Karl A. Erb, director of NSF's Office of Polar Programs (OPP). Through OPP, NSF manages the U.S. Antarctic Program, which coordinates all U.S. research on the southernmost continent and surrounding oceans.

"What's more," he added, "although the IceCube project is primarily funded by the National Science Foundation, it exemplifies a modern trend in the increasingly complex and multi-disciplinary scientific world; large-scale projects like the IceCube detector are too complex to be effectively mounted by one nation alone, but also require the scientific and logistical expertise of many nations acting together to produce scientifically significant results."

Since 2004, the U.S., Belgium, Germany and Sweden have been building the detector in the continental ice sheet that covers Antarctica to a depth of almost three kilometers in places. A powerful hot-water drill creates holes almost 2.5 kilometers deep into the ice. These holes house strings of digital optical modules that actually detect the interactions of the neutrinos with the ice.

Seven holes remained to be drilled in December 2010, which will bring the total to 86 strings.

The agreement with NSF covers the cost of operating the IceCube detector and managing the data it gathers in the U.S., enabling researchers to acquire the highest quality scientific data and store it for further distribution. IceCube's foreign collaborators also contribute to the detector's maintenance and operation through in-kind support and contributions to a common fund. The Madison-based IceCube Research Center transforms the detector's raw data to make it accessible for scientific analysis by the IceCube Collaboration.

"A secure, long-term funding plan is essential to a successful operations program. This award continues the strong partnership between NSF and UW that all of our collaborators depend upon," said IceCube Project Director Jim Yeck.