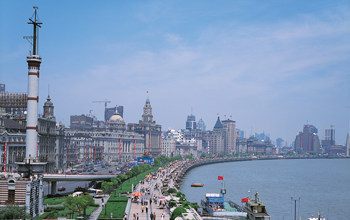 Employees, who work for large companies in China, engage in pro-environmental behavior.

People with good jobs found in large cities are more likely to engage in pro-environmental activities. So says a new study of China's environmental behavior published this week in the British journal Environmental Conservation.

For the first time, scientists weighed employment and leadership when considering how people act regarding their natural surroundings. They found the status and political power of companies in cities such as Beijing, Shanghai and Tianjin strongly influence the conservation practices of their employees.

Moreover, the scientists found employees who work for these companies--especially the workplace leaders--are particularly likely to engage in environmentally friendly activities that signal a desire to be green by, for example, sorting trash and participating in environmental litigation.

Scientists at the Center for Systems Integration and Sustainability (CSIS) at Michigan State University led the study along with collaborators in the United States and China.

"Employment matters with regard to pro-environmental behavior due to many different reasons," said Xiaodong Chen, who conducted the study with colleagues while working on his doctorate in sustainability science at MSU. "First, people may be affected by peers in their workplace through the diffusion of environmental values.

"Second, some pro-environmental behaviors need facilitating support such as equipment for classifying garbage or social groups who can organize these activities. Employment settings sometimes provide such support," he said regarding specific findings in urban China.

Chen and colleagues analyzed data from China's General Social Survey of 2003. The survey questioned some 5,000 respondents from different-sized urban areas about their environmental behavior.

"It is essential to study human behavior because behavior directly affects the environment," said Jianguo "Jack" Liu, CSIS director and a co-author on the paper. "As China is the world's fastest growing economy and cities are the economic engines with severe environmental challenges, understanding environmental behavior of urban residents in China is particularly important."

Thomas Baerwald, a Dynamics of Coupled Natural and Human Systems program officer at the National Science Foundation (NSF) agreed. "Because China's rapid economic growth is likely to continue, China will provide a setting where U.S. researchers and decision makers can learn much about the ways to sustain both environmental quality and economic prosperity," he said.

"By monitoring attitudes and behavior through the use of instruments like general social surveys, scientists and decision makers can better understand the ways people respond as economic and environmental conditions change," said Baerwald.

"You don't have to be rich to consider environmental issues," said Chen. "Even if people are poor and their material needs are not as well met, they still consider the environmental quality because those people may be threatened more by environmental problems."

"The results of this project demonstrate the importance of examining the environmental attitudes and behavior of people over longer time periods," said Baerwald. "This study challenges widely held beliefs that maintaining environmental quality is a luxury that can be justified only in wealthier settings."

As its urban areas continue to grow, the findings will help China determine which audiences to target to encourage behaviors that can help counter the environmental costs associated with rapid economic growth. The researchers also say the study can benefit the United States.

Liu and Chen were joined in this research by Nils Peterson and Graise Lee of North Carolina State University, Vanessa Hull, a doctoral candidate in CSIS, Chuntian Lu, a doctoral student in MSU's sociology department and Dayong Hong of Renmin University in China.