The Most Genes in an Animal? Tiny Crustacean Holds the Record 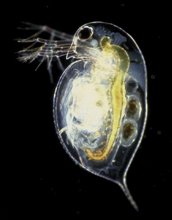 The tiny water flea Daphnia has the most genes of any animal, some 31,000.

Scientists have discovered that the animal with the most genes--about 31,000--is the near-microscopic freshwater crustacean Daphnia pulex, or water flea.

By comparison, humans have about 23,000 genes. Daphnia is the first crustacean to have its genome sequenced.

The water flea's genome is described in a Science paper published this week by members of the Daphnia Genomics Consortium, an international network of scientists led by the Center for Genomics and Bioinformatics (CGB) at Indiana University (IU) Bloomington and the U.S. Department of Energy's Joint Genome Institute.

"Daphnia's high gene number is largely because its genes are multiplying, creating copies at a higher rate than other species," said project leader and CGB genomics director John Colbourne.

"This analysis of the Daphnia genome significantly advances our understanding of how an organism's genome interacts with its environment both to influence genome structure and to confer ecological and evolutionary success," says Saran Twombly, program director in the National Science Foundation (NSF)'s Division of Environmental Biology, which funded the research.

"This gene-environment interplay has, to date, been studied in model organisms under artificial, laboratory conditions," says Twombly.

"Because the ecology of Daphnia pulex is well-known, and the organism occurs abundantly in the wild, this analysis provides unprecedented insights into the feedback between genes and environment in a real and ever-changing environment."

Daphnia's genome is no ordinary genome.

What reasons might Daphnia have so many genes compared to other animals?

A possibility, Colbourne said, is that "since the majority of duplicated and unknown genes are sensitive to environmental conditions, their accumulation in the genome could account for Daphnia's flexible responses to environmental change."

Scientists have studied Daphnia for centuries because of its importance in aquatic food webs and for its transformational responses to environmental stress.

Like the virgin nymph of Greek mythology that shares its name, Daphnia thrives in the absence of males--by clonal reproduction, until harsh environmental conditions favor the benefits of sex.

"More than one-third of Daphnia's genes are undocumented in any other organism--in other words, they are completely new to science," says Don Gilbert, paper co-author and scientist at IU Bloomington.

Sequenced genomes often contain some fraction of genes with unknown functions, even among the most well-studied genetic model species for biomedical research, such as the fruit fly Drosophila.

"If such large fractions of genomes evolved to cope with environmental challenges, information from traditional model species used only in laboratory studies may be insufficient to discover the roles for a considerable number of animal genes," Colbourne said.

Daphnia is emerging as a model organism for a new field of science--environmental genomics--that aims to better understand how the environment and genes interact.

This includes a practical need to apply scientific developments from this field to managing our water resources and protecting human health from chemical pollutants in the environment.

James Klaunig, a scientist at IU Bloomington, predicts that the work will yield a more realistic and scientifically-based risk evaluation.

"Genome research on the responses of animals to stress has important implications for assessing environmental risks to humans," Klaunig said. "Daphnia is an exquisite aquatic sensor, a potential high-tech and modern version of the mineshaft canary."

"With knowledge of its genome, and using both field sampling and laboratory studies, the possible effects of environmental agents on cellular and molecular processes can be resolved and linked to similar processes in humans."

The scientists learned that of all sequenced invertebrate genomes so far, Daphnia shares the most genes with humans.

Daphnia's gene expression patterns change depending on its environment, and the patterns indicate what state its cells are in.

A water flea bobbing in water containing a chemical pollutant will tune-up or tune-down a suite of genes differently than its sisters accustomed to water without the pollutant, for example.

The health effects of most industrially produced compounds in the environment are unknown, because current testing procedures are too slow, too costly, and unable to indicate the causes for their effects on animals, including humans.

Over the course of the project, the Daphnia Genomics Consortium has grown from a handful of founding members to more than 450 investigators around the globe.

"Assembling so many experts around a shared research goal is no small feat," said Peter Cherbas, director of the CGB. "The genome project signals the coming-of-age of Daphnia as a research tool for investigating the molecular underpinnings of key ecological and environmental problems."

Colbourne agreed, adding, "New model systems rarely arrive on the scene with such clear and important roles to play in advancing a new field of science."