Need snowpack that lasts through winter and well into spring 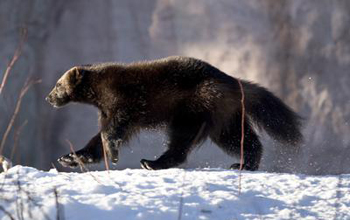 How much longer will wolverines roam in northern snows? Climate change holds the key.

The aggressive wolverine may not be powerful enough to survive climate change in the contiguous United States, new research concludes.

Wolverine habitat in the northwestern United States is likely to warm dramatically if society continues to emit large amounts of greenhouse gases, according to new computer model simulations carried out at the National Center for Atmospheric Research (NCAR) in Boulder, Colo.

"The researchers have combined regional-scale climate projections with knowledge of a single species and its unique habitat to examine its vulnerability to a changing climate," says Sarah Ruth, program director in NSF's Directorate for Geosciences, which funds NCAR.

"This study is an example of how targeted climate predictions can produce new insights that could help us reduce the impact of future climate change on delicate ecosystems."

Climate change is likely to imperil the wolverine in two ways: reducing or eliminating the springtime snow cover that wolverines rely on for raising their young, and increasing August temperatures well beyond what the species may be able to tolerate.

"Species that depend on snow cover for their survival are likely to be very vulnerable to climate change," says NCAR scientist Synte Peacock, the lead author of a paper reporting the study's results.

"It's highly uncertain whether wolverines will continue to survive in the lower 48, given the changes that are likely to take place there."

Peacock's research focused on mountainous regions of the Northwest, the primary habitat of the wolverine population in the contiguous United States.

Results of the study were published last week in Environmental Research Letters. The work was funded by the National Science Foundation (NSF), NCAR's sponsor.

Wolverines make their home mainly in the boreal forests and tundra regions of North America, Europe and Asia.

While some 15,000 or more wolverines may roam Canada, only a few dozen to a few hundred are believed to live in the contiguous United States, almost entirely in mountainous areas in Wyoming, Idaho, Montana and Washington.

Female wolverines make their springtime dens in the snow, which provides warmth to the newborn kits, the proper name for wolverine young, and protects them from predators.

Biologists are doubtful that the species could survive in regions with little spring snow or significantly higher summertime temperatures.

To project the future climate in regions of the contiguous United States where wolverines live, Peacock analyzed results from new simulations carried out by a team of researchers at NCAR.

They used the newest version of the Community Climate System Model, developed by scientists at the Department of Energy and NCAR with colleagues at other organizations.

Peacock analyzed three scenarios of greenhouse gas emissions: low (carbon dioxide emissions stay at present-day levels until 2020, then decline to zero by the early 2080s); medium-low (emissions rise slightly until 2040, then decline sharply toward the end of the century); and high (emissions continue to increase unabated).

In the high emissions scenario, the computer simulations showed spring snow cover nearly or completely vanishing during the second half of this century in present-day wolverine habitat.

Under the low emissions scenario, springtime snow cover conditions remained similar to those of the present day.

August temperatures currently top off at about 90 degrees Fahrenheit in areas where wolverines live. But maximum daily temperatures by the end of the century were projected to exceed 90 degrees under the two higher-emission scenarios.

Unless the wolverine is able to very rapidly adapt to summertime temperatures far above anything it currently experiences, and to a spring with little or no snow cover, it is unlikely that it will continue to survive in the contiguous U.S. under a high or medium-low emissions scenario.

The model simulations also indicated the extent to which climate change may transform the West, where society depends on mountain snowpack for fresh water.

This critical source of water could decrease by a factor of three to four in Idaho, western Montana, and western Wyoming by the end of this century under the high emissions scenario.

Even under the medium-low emissions scenario, snowpack could drop by a factor of two to three in these regions.