Plant receptors use different signalling method than do animal receptors 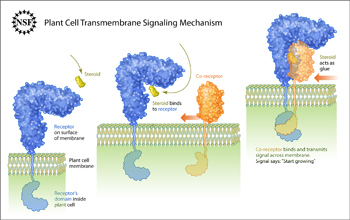 Transmembrane signaling in a plant cell aided by a steroid.

Every living plant cell and animal cell is surrounded by a membrane. These cellular membranes contain receptor molecules that serve as the cell's eyes and ears, and help it communicate with other cells and with the outside world.

The receptor molecules accomplish three basic things in the communication process: 1) recognize an outside signal, 2) transport that signal across the cell's membrane and 3) initiate the reading of the signal inside the cell and then initiate the cell's response to that signal. These steps are collectively known as transmembrane signaling.

Transmembrane signaling in animal cells has been significantly more studied and observed than that in plant cells. But now, with support from the National Science Foundation, researchers from Joanne Chory's laboratory at the Salk Institute have published new observations about transmembrane signaling in plants; their paper appears in the June 12, 2011, advanced online edition of Nature.

According to the study, transmembrane signaling mechanisms used by plants differ from those used by animals. Specifically, Michael Hothorn of the Salk Institute reports that a small steroid molecule on the outside of the plant cell assists in the transmembrane signaling process. By contrast, this sort of molecule and its receptor is generally located inside the nuclei of animal cells.

While studying transmembrane signaling in plants, Hothorn and colleagues observed the steroid, shown in yellow, attach to a membrane-bound receptor, shown in blue. This attachment enabled the steroid's counterpart--a co-receptor protein, shown in orange--to bind to the blue receptor. Once bound, the orange co-receptor and the blue receptor become glued together by the yellow steroid, allowing their intracellular domains to touch and initiate communication.