Surprisingly, people born between 1961 and 1981 are not isolated socially 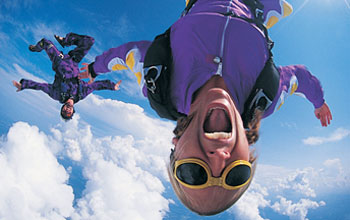 New study says Generation X not quite what was expected.

View a webcast with political scientist Jon D. Miller of the University of Michigan.

Despite being stereotyped as a bunch of insecure underachievers, most members of Generation X lead active, balanced and happy lives, according to a long-term University of Michigan survey.

"They are not bowling alone," says political scientist Jon D. Miller, author of The Generation X Report. "They are active in their communities, mainly satisfied with their jobs and able to balance work, family and leisure."

Miller directs the Longitudinal Study of American Youth (LSAY) at the Institute for Social Research at University of Michigan. The study, funded by the National Science Foundation since 1986, now includes responses from approximately 4,000 Gen Xers--those born between 1961 and 1981.

"The LSAY is one of the longest-running longitudinal studies of Americans and addresses a broad variety of their attitudes, perceptions and everyday activities," says Gavin Fulmer, associate program director in NSF's Division of Research on Learning.

"It is especially important as one of the only longitudinal surveys to examine participants' engagement with science and mathematics from formal schooling and into everyday life, including their participation in lifelong science learning activities for themselves and with their own children," Fulmer says.

"The 84 million Americans in this generation between the ages of 30 and 50 are the parents of today's school-aged children," says Miller. "And over the next two or three decades, members of Generation X will lead the nation in the White House and Congress. So it's important to understand their values, history, current challenges and future goals."

The first in a new quarterly series of Generation X Reports describes how Gen Xers are faring in terms of employment and education; marriage and families; parenting; community involvement and religion; social relationships; recreation and leisure; digital life; and happiness and life satisfaction.

In sociologist Robert Putnam's influential book, Bowling Alone, he argued that Americans were increasingly isolated socially," says Miller. "But this data indicates that Generation X members are not bowling alone. Although they may be less likely to join community-based luncheon clubs, they have extensive social, occupational, and community networks. They are active participants in parent-teacher organizations, local youth sports clubs, book clubs, and other community organizations."

In addition, Miller points out that nearly 90 percent of Generation X adults participated in at least one outdoor activity, such as hiking, swimming, boating or fishing, and 40 percent engaged in two or more recreation and leisure activities per month.

On the cultural side, 45 percent of the Generation X adults surveyed reported attending at least one play, symphony, opera or ballet performance during the preceding year, and 13 percent said they attended three or more cultural events during the last year.

"Generation X adults are also readers," notes Miller. "Seventy-two percent read a newspaper in print or online at least once a week, and fully 80 percent bought and read at least one book during the last year. Nearly half said that they read six or more books in the last year."

Finally, Miller reports, Generation X adults are happy with their lives, with an average level of 7.5 on a 10-point scale in which 10 equals "very happy."

"That is not to say that some members of this generation are not struggling," says Miller. "And in future issues of the Generation X report we will address some of the challenges many members of this group are facing."

The second Generation X Report will be issued in January 2012, on the topic of influenza. Using data collected during the 2010 influenza epidemic, the January report will explore how young adults kept abreast of the issue and what actions they eventually took to protect themselves and their families. Subsequent reports will cover food and cooking; climate, space exploration, and citizenship and voting.