For the first time, public allowed to vote on entries 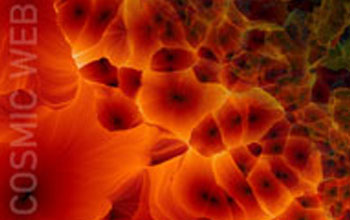 The National Science Foundation (NSF) along with the journal Science, published by the American Association for the Advancement of Science (AAAS), today announced the winners of the ninth annual International Science & Engineering Visualization Challenge.

Illustrators, photographers, computer programmers and designers from around the world submitted visualizations to a once-a-year challenge designed to celebrate and encourage the visual communication of science for education and journalistic purposes. Two-hundred-twelve entries were received from 33 countries, representing every continent except Antarctica.

For the first time, this year's challenge allowed participants to submit entries online. The public also participated for the first time in the voting process, selecting their favorite images as People's Choice winners. One entry, "Velu the Welder" in the Interactive Games category, received 286 public votes. All together, the entries received 3,204 public votes.

Another entry, "Rapid Visual Inventory & Comparison of Complex 3D Structures" won 1st place from the judges and was the People's Choice in the Video category.

Also for the first time this year, participants and the public were able to use social media, such as Facebook and Twitter, to share their favorites with others.

Winning entries can be viewed on the NSF website, the Science website and in the February 3rd print issue of Science.

Honorable Mention: Microscopic Image of Trichomes on the Skin of an Immature Cucumber
Robert Rock Belliveau