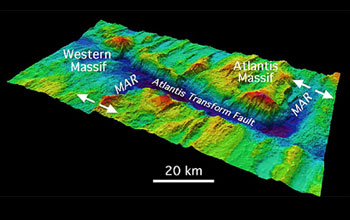 Scientists recently concluded an expedition aboard the research vessel JOIDES Resolution to learn more about Atlantis Massif, an undersea mountain, or seamount, that formed in a very different way than the majority of the seafloor in the oceans.

Unlike volcanic seamounts, which are made of the basalt that's typical of most of the seafloor, Atlantis Massif includes rock types that are usually only found much deeper in the ocean crust, such as gabbro and peridotite.

The expedition, known as Integrated Ocean Drilling Program (IODP) Expedition 340T, marks the first time the geophysical properties of gabbroic rocks have successfully been measured directly in place, rather than via remote techniques such as seismic surveying.

With these measurements in hand, scientists can now infer how these hard-to-reach rocks will "look" on future seismic surveys, making it easier to map out geophysical structures beneath the seafloor.

"This is exciting because it means that we may be able to use seismic survey data to infer the pattern of seawater circulation within the deeper crust," says Donna Blackman of the Scripps Institution of Oceanography in La Jolla, Calif., co-chief scientist for Expedition 340T.

"This would be a key step for quantifying rates and volumes of chemical, possibly biological, exchange between the oceans and the crust."

Atlantis Massif sits on the flank of an oceanic spreading center that runs down the middle of the Atlantic Ocean.

As the tectonic plates separate, new crust is formed at the spreading center and a combination of stretching, faulting and the intrusion of magma from below shape the new seafloor.

Periods of reduced magma supplied from the underlying mantle result in the development of long-lived, large faults. Deep portions of the crust shift upward along these faults and may be exposed at the seafloor.

This process results in the formation of an oceanic core complex, or OCC, and is similar to the processes that formed the Basin and Range province of the Southwest United States.

"This work significantly adds to our ability to infer ocean crust structure and composition, including predicting how ocean crust has 'aged' in an area," says Allan, "thereby giving us new tools for understanding ocean crust creation from Earth's mantle."

Atlantis Massif is a classic example of an oceanic core complex.

Because it's relatively young--formed within the last million years--it's an ideal place, scientists say, to study how the interplay between faulting, magmatism and seawater circulation influences the evolution of an OCC within the crust.

"Vast ocean basins cover most of the Earth, yet their crust is formed in a narrow zone," says Blackman. "We're studying that source zone to understand how rifting and magmatism work together to form a new plate."

The JOIDES Resolution first visited Atlantis Massif about seven years ago; the science team on that expedition measured properties in gabbro.

But they focused on a shallower section, where pervasive seawater circulation had weathered the rock and changed its physical properties.

For the current expedition, the team did not drill new holes.

Rather, they lowered instruments into a deep existing hole drilled on a previous expedition, and made measurements from inside the hole.

The new measurements, at depths between 800 and 1,400 meters (about 2,600-4,600 feet) below the seafloor, include only a few narrow zones that had been altered by seawater circulation and/or by fault slip deformation.

The rest of the measurements focused on gabbroic rocks that have remained unaltered thus far.

The team found small differences in temperature next to two sub-seafloor faults, which suggests a slow percolation of seawater within those zones.

There were also significant differences in the speed at which seismic waves travel through the altered vs. unaltered zones.

"The expedition was a great opportunity to ground-truth our recent seismic analysis," says Alistair Harding, also from the Scripps Institution of Oceanography and a co-chief scientist for Expedition 340T.

"It also provides vital baseline data for further seismic work aimed at understanding the formation and alteration of the massif."

The Integrated Ocean Drilling Program (IODP) is an international research program dedicated to advancing scientific understanding of the Earth through drilling, coring and monitoring the subseafloor.

The JOIDES Resolution is a scientific research vessel managed by the U.S. Implementing Organization of IODP (USIO). Texas A&M University, Lamont-Doherty Earth Observatory of Columbia University and the Consortium for Ocean Leadership comprise the USIO.

Additional program support comes from the European Consortium for Ocean Research Drilling, the Australia-New Zealand IODP Consortium, India's Ministry of Earth Sciences, the People's Republic of China's Ministry of Science and Technology, and the Korea Institute of Geoscience and Mineral Resources.

For more information on the expedition, please visit the IODP Expedition 340T Photos.