Study reveals the potentially large influences of fungi, one of the most biologically diverse classes of organisms, on our energy supplies 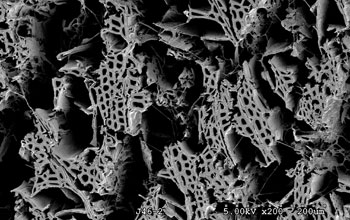 A scanning electron micrograph of wood decayed by white rot.

A new study--which includes the first large-scale comparison of fungi that cause rot decay--suggests that the evolution of a type of fungi known as white rot may have brought an end to a 60-million-year-long period of coal deposition known as the Carboniferous period. Coal deposits that accumulated during the Carboniferous, which ended about 300 million years ago, have historically fueled about 50 percent of U.S. electric power generation.

In addition, the study provides insights about diverse fungal enzymes that might be used in the future to help generate biofuels, which are currently among the most promising and attractive alternatives to fossil fuels for powering vehicles.

The study, which was conducted by a team of 71 researchers from 12 countries, appears in the June 29, 2012 issue of Science and was partially funded by the National Science Foundation (NSF).

There are almost 1.5 million fungi species on Earth. They perform essential ecological roles that include decomposing organisms and serving as food for many insect species and larger organisms.

However, only about five percent of fungi species have, thus far, been classified. The new study is part of an effort--supported by NSF's Assembling the Tree of Life and Partnerships for Enhancing Expertise in Taxonomy programs--to resolve evolutionary relationships between fungi species, define the diversity of fungi, and explain the early evolutionary history of fungi. Information produced by this effort is integral to the story of life on Earth and the evolution of its varied ecosystems.

The end of a geologic era

Coal is composed of the fossilized remains of plants--mostly lignin, which is a complex polymer that is an important component of the cell walls of plants and helps give wood its strength and rigidity. The study indicates that white rot fungi, which are the only types of microorganisms that can break down lignin, evolved at the end of the Carboniferous green period, and that the synchrony between the rise of white rot fungi and the close of the Carboniferous was no coincidence.

According to the study, once white rot, which breaks down lignin via enzymatic activity, became an ecological force, it destroyed huge accumulations of woody debris that would have otherwise escaped decay to ultimately be fossilized as coal.

Lignin exists in cell walls as part of a tough matrix with cellulose, which is a carbohydrate composed of sugar subunits. But once white rot attacks and destroys lignin, the matrix collapses, and the cellulose is freed--to be devoured by the white rot as food.

The ability of white rot fungi to decay lignin may ultimately be used to help conquer what is among the world's most longstanding and vexing problems associated with the large-scale production of biofuels: that is, obtaining plant carbohydrates that could be converted into biofuels via fermentation processes.

It may ultimately be feasible to use white rot to break down lignin to release cellulose from cell walls, which could then be broken down into sugars. Next, the sugars would be fed to yeast that would be fermented into alcohols that would provide the bases for new biofuels.

In addition, because enzymes from white rot fungi are able to break down complex organic molecules, they have been investigated for use in bioremediation operations that involve breaking down contaminants to remove them from the environment.

"Our study was designed to reconstruct the evolution of lignin decay mechanisms in fungi, analyze the distribution of enzymes that enable fungi to break down lignin, and better define the evolution of the gene families that encode those enzymes," said David Hibbett of Clark University, who led the study.

Hibbett and his team focused on a large group of fungi known as Agaricomycetes, which include white rot fungi as well as mushroom species that have the familiar cap-and-stem shape. The Agaricomycetes group also includes brown rot fungi that can destroy wood by breaking down cellulose and hemicellulose, which is another component of cell walls--all the while without breaking down lignin.

"The 12 new genome sequences could serve as potential resources for industrial microbiologists aiming to develop new tools for producing biofuels, bioremediation or other products, perhaps by using recombinant DNA methods or by selecting new organisms for fermentation," said Hibbett.

"This study exemplifies the tremendous gains we can make in understanding complicated biologic processes such as lignin decomposition when we learn about the genealogical relationships of organisms," said Charles Lydeard, an NSF program director.

The evolution of white rot

The study also involved tracking the evolution of lignin-decomposing enzymes back through time. This was done via so-called "molecular clock analyses." Such analyses are based on the assumption that genes accumulate mutations through evolution at fairly predictable rates--similar to the way that the hands of a clock advance around a clock at predictable rates. The ability to estimate these mutation rates enables researchers to trace mutations back in time and estimate how recently fungal lineages shared a common ancestor but then diverged from one another.

Results of molecular clock analyses suggest that the oldest ancestor of the Agaricomcyetes was a white rot species that possessed multiple lignin-degrading enzymes and lived roughly 300 million years ago. Many surviving lineages of Agaricomycetes-including fungi species known as wood-decaying polypores and bracket fungi-produce lignin-degrading enzymes. "Our results suggest that the ability of fungi to break down lignin evolved only once," said Hibbett.

In addition, Hibbett said, "This study underscores the adaptability of fungi." This adapatability is underscored by the fact that some Agaricomycete lineages have maintained their lignin-degrading enzymes. By contrast, other Agaricomycete lineages, including brown rot and mycorrhizal species, which survive via symbiotic relationships with the roots of certain trees without decaying them, ultimately lost their lignin-degrading enzymes as they developed alternative methods of obtaining nutrition, said Hibbett.

The economic value of fungi is already almost incalculable: fungi currently impact diverse applied disciplines, including agriculture, medicine and drug discovery. The more scientists learn about these important organisms, the more likely they will be to identify additional uses for them that will benefit the economy, the environment, and human welfare, as well as to develop new ways to fight wood rot that, at great costs, kills trees and destroys wood structures, including homes and ships.

Joseph Spatafora of Oregon State University who is a co-author on the study said, "It's a really exciting time in fungal biology, and part of that is due to the technology today that allows us to address the really longstanding questions."