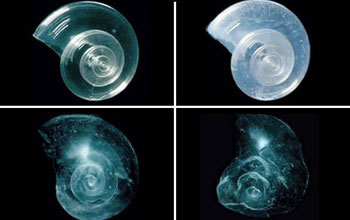 A shell placed in seawater with increased acidity slowly dissolves over 45 days.

The oceans may be acidifying faster today than at anytime in the past 300 million years, scientists have found.

The awards, the second round in this program, are supported by NSF's Directorates for Geosciences and Biological Sciences, and Office of Polar Programs.

"With this round of awards, NSF has an increasingly diverse portfolio of research projects on ocean acidification," says David Garrison, program director in NSF's Directorate for Geosciences and chair of NSF's Ocean Acidification Working Group.

"We look forward to building on this effort over the next few years, and expect that ocean acidification research will be a major contribution to SEES efforts at NSF."

The researchers believe there is a need to understand the chemistry of ocean acidification and its interplay with marine biochemical and physiological processes before Earth's seas become inhospitable to life as it is known today.

Animal species from pteropods--delicate, butterfly-like planktonic drifters--to hard corals are affected by ocean acidification. So, too, are the unseen microbes that fuel ocean productivity and influence the chemical functioning of ocean waters.

The physiology of many marine species, from microbes to fish, may be affected.  A myriad of chemical reactions and cycles are influenced by the pH, or acidity, of the oceans.

"The Ocean Acidification awards address how organisms detect carbon dioxide and levels of acidity, and regulate these variables in their cells and body fluids," says William Zamer, program director in NSF's Directorate for Biological Sciences.

"These projects include studies of whether populations of animals have the genetic capacity to adapt to ocean acidification. The findings will yield new insights about how a future more acidic ocean will affect marine life."

Earth system history informs our understanding of the effects of ocean acidification in the present and the future, says Garrison.

For a true comprehension of how acidification will change the oceans, he says, we must integrate paleoecology with marine chemistry, physics, ecology and an understanding of the past environmental conditions on Earth.

Overall, Ocean Acidification grantees will ask questions such as will regional differences in marine chemistry and physics increase acidification? Are there complex interactions, cascades and bottlenecks that will emerge as the oceans acidify, and what are their ecosystem implications? And if current trends continue, how far-reaching will the changes be?

NSF 2012 Ocean Acidification awardees, their institutions and projects are: