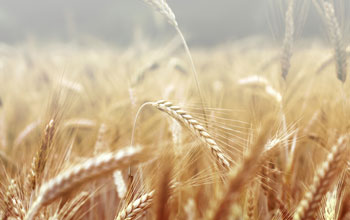 Scientists from the United States, United Kingdom and Germany recently completed the first analysis of the bread wheat genome, one of the "big three" global crops upon which mankind depends for nutrition.

The work is a major breakthrough in understanding an exceptionally large and complex genome, and it lays strong foundations for improving wheat through breeding practices and genetic engineering, say researchers.

"Wheat is a seminally important crop along with rice and corn. This international effort that includes NSF-supported scientists leveraged funding and resources from across the globe to support the broader wheat research community," said Wingfield.

NSF's Division of Integrative Organismal Systems through its Plant Genome Research Program funded research in the United States conducted at Cold Spring Harbor Laboratory in New York and at University of California, Davis. Details of the genomic analysis are in this week's Nature magazine.

The research involved identifying essentially all 94,000-96,000 wheat genes and mapping their relationships to other genes. The advance will allow scientists to accelerate breeding and discover new genes that control important traits such as disease resistance and drought tolerance.

Previously, the size and complexity of the wheat genome had been significant barriers to performing a complete analysis. But, the researchers were able to make rapid progress by developing a new strategy that compared wheat sequences to known grass genes--from rice and barley, for example.

Then they compared these known grass genes to direct ancestors of wheat, whose genomes are much simpler than modern wheat cereal grasses. This revealed a highly dynamic genome.

"The raw data of the wheat genome is like having tens of billions of scrabble letters," said Neil Hall, a lead researcher at the University of Liverpool's Centre for Genome Research in the United Kingdom. "You know which letters are present and their quantities, but they need to be assembled on the board in the right sequence before you can spell out their order into genes."

The gene comparison also revealed a wheat genome that has undergone genetic loss as a consequence of domestication.

Archeological and genetic evidence points to the South Caspian Basin near Iran and Azerbaijan as the origin of bread wheat cultivation about 8,000 years ago. Its cultivation is directly associated with the rapid spread of settled societies.

Today, wheat is one of the most widely cultivated crops due to its adaptability, high yields and nutritional and processing qualities. But new diseases and sub-optimal growing conditions have steadily reduced yields, increased prices and reduced reserves.

In addition, genetic variation in current, cultivated wheat varieties has been fully exploited by breeders, slowing increases in yield during the last 40 years.

The researchers anticipate the analysis will reverse the trend.

"The analysis has translated this genetic data into accessible tools that will accelerate breeding and the discovery of varieties with better disease resistance and stress tolerance," said Klaus Mayer from the Helmholtz-Zentrum Munich, who studies environmental health issues in Germany and participated in the analysis.

The impact of the research already has been considerable because the authors provided the sequence and analyses directly to users in industry and academia to jumpstart uses as soon as the genome analysis was generated in August 2010.

The approach provides a publicly accessible database so that any breeder or researcher worldwide can access the necessary molecular tools to rationally construct improved wheat varieties, according to Peter Jack of RAGT Seeds, one of Europe's leading seeds suppliers.

"We approached this as perhaps the supreme challenge for genomic analysis with next-gen sequencing, and are delighted to have contributed to this first major step in the physical characterization of the wheat genome," said Richard McCombie, genetics professor at Cold Spring Harbor Laboratory.

"While we and our collaborators continue to work to enhance the resolution of our knowledge of the wheat genome, these results should have a significant impact on breeding efforts and further research studies of the wheat genomes and those of its wild relatives," McCombie said.

In addition to the National Science Foundation, the United States Department of Agriculture--Agriculture Research Service and the National Institute of Food and Agriculture--the UK Biological and Biotechnological Sciences Research Council and the German Ministry of Education and Research supported the work.

In addition to the institutions mentioned above, the University of Bristol, as well as the John Innes Centre Norwich and the European Bioinformatics Institute in the United Kingdom were instrumental in the outcome of the research.