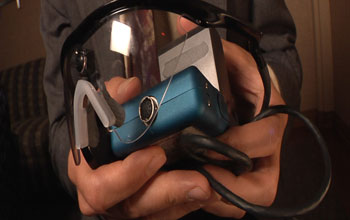 
Researchers and patients describe concepts and early devices that led to the Argus II.

B-roll and VNR are available. Please contact Dena Headlee at

The U.S. Food and Drug Administration (FDA) granted market approval to an artificial retina technology today, the first bionic eye to be approved for patients in the United States. The prosthetic technology was developed in part with support from the National Science Foundation (NSF).

The device, called the Argus® II Retinal Prosthesis System, transmits images from a small, eye-glass-mounted camera wirelessly to a microelectrode array implanted on a patient's damaged retina. The array sends electrical signals via the optic nerve, and the brain interprets a visual image.

The FDA approval currently applies to individuals who have lost sight as a result of severe to profound retinitis pigmentosa (RP), an ailment that affects one in every 4,000 Americans. The implant allows some individuals with RP, who are completely blind, to locate objects, detect movement, improve orientation and mobility skills and discern shapes such as large letters.

The Argus II is manufactured by, and will be distributed by, Second Sight Medical Products of Sylmar, Calif., which is part of the team of scientists and engineers from the university, federal and private sectors who spent nearly two decades developing the system with public and private investment.

"Seeing my grandmother go blind motivated me to pursue ophthalmology and biomedical engineering to develop a treatment for patients for whom there was no foreseeable cure," says the technology's co-developer, Mark Humayun, associate director of research at the Doheny Eye Institute at the University of Southern California and director of the NSF Engineering Research Center for Biomimetic MicroElectronic Systems (BMES). "It was an interdisciplinary approach grounded in biomedical engineering that has allowed us to develop the Argus II, making it the first commercially approved retinal implant in the world to restore sight to some blind patients," Humayun adds.

The effort by Humayun and his colleagues has received early and continuing support from NSF, the National Institutes of Health and the Department of Energy, with grants totaling more than $100 million. The private sector's support nearly matched that of the federal government.

"The retinal implant exemplifies how NSF grants for high-risk, fundamental research can directly result in ground-breaking technologies decades later," said Acting NSF Assistant Director for Engineering Kesh Narayanan. "In collaboration with the Second Sight team and the courageous patients who volunteered to have experimental surgery to implant the first-generation devices, the researchers of NSF's Biomimetic MicroElectronic Systems Engineering Research Center are developing technologies that may ultimately have as profound an impact on blindness as the cochlear implant has had for hearing loss."

Although some treatments to slow the progression of degenerative diseases of the retina are available, no treatment has existed that could replace the function of lost photoreceptors in the eye.

The researchers began their retinal prosthesis research in the late 1980s to address that need, and in 1994 Humayun received his first NSF grant, an NSF Young Investigator Award, which built upon additional support from the Whittaker Foundation. Humayun used the funding to develop the first conceptualization of the Argus II's underlying artificial retina technology.

Since that time, he and his collaborators--including Wentai Liu of the University of California, Los Angeles and fellow USC researchers Jim Weiland and Eugene de Juan, Jr.--received six additional NSF grants, totaling $40 million, some of which was part of NSF's funding for BMES, launched in 2003. BMES drives research into a range of sophisticated prosthetic technologies to treat blindness, paralysis and other conditions.

"We were encouraged by the team's exploratory work in the 1980s and 1990s, supported by NSF and others, which revealed that healthy neural pathways can carry information to the brain, even though other parts of the eye are damaged," adds Narayanan. "The retinal prosthesis they developed from that work simulates the most complex part of the eye. Based on the promise of that implant, we decided in 2003 to entrust the research team with an NSF Engineering Research Center," says Narayanan. "The center was to scale up technology development and increase device sensitivity and biocompatibility, while simultaneously preparing students for the workforce and building partnerships to speed the technology to the marketplace, where it could make a difference in people's lives. The center has succeeded with all of those goals."

The researchers' efforts have bridged cellular biology--necessary for understanding how to stimulate the retinal ganglion cells without permanent damage--with microelectronics, which led to the miniaturized, low-power integrated chip for performing signal conversion, conditioning and stimulation functions. The hardware was paired with software processing and tuning algorithms that convert visual imagery to stimulation signals, and the entire system had to be incorporated within hermetically sealed packaging that allowed the electronics to operate in the vitreous fluid of the eye indefinitely. Finally, the research team had to develop new surgical techniques in order to integrate the device with the body, ensuring accurate placement of the stimulation electrodes on the retina.

"The artificial retina is a great engineering challenge under the interdisciplinary constraint of biology, enabling technology, regulatory compliance, as well as sophisticated design science," adds Liu. "The artificial retina provides an interface between biotic and abiotic systems. Its unique design characteristics rely on system-level optimization, rather than the more common practice of component optimization, to achieve miniaturization and integration. Using the most advanced semiconductor technology, the engine for the artificial retina is a 'system on a chip' of mixed voltages and mixed analog-digital design, which provides self-contained power and data management and other functionality. This design for the artificial retina facilitates both surgical procedures and regulatory compliance."

The Argus II design consists of an external video camera system matched to the implanted retinal stimulator, which contains a microelectrode array that spans 20 degrees of visual field. The NSF BMES ERC has developed a prototype system with an array of more than 15 times as many electrodes and an ultra-miniature video camera that can be implanted in the eye. However, this prototype is many years away from being available for patient use.

"The external camera system-built into a pair of glasses-streams video to a belt-worn computer, which converts the video into stimulus commands for the implant," says Weiland. "The belt-worn computer encodes the commands into a wireless signal that is transmitted to the implant, which has the necessary electronics to receive and decode both wireless power and data. Based on those data, the implant stimulates the retina with small electrical pulses. The electronics are hermetically packaged and the electrical stimulus is delivered to the retina via a microelectrode array."

In 1998, Robert Greenberg founded Second Sight to develop the technology for the marketplace. While under development, the Argus I and Argus II systems have won wide recognition, including a 2010 Popular Mechanics Breakthrough Award and a 2009 R&D 100 Award, but it is only with FDA approval that the technology can now be made available to patients.

"An artificial retina can offer hope to those with retinitis pigmentosa, as it may help them achieve a level of visual perception that enhances their quality of life, enabling them to perform functions of daily living more easily and the chance to enjoy simple pleasures we may take for granted," says Narayanan. "Such success is the result of fundamental studies in several fields, technology improvements based on those results and feedback from clinical trials--all enabled by sustained public and private investment from entities like NSF."

For more, please see an NSF Science Nation video on the Argus I technology, and read more about the early stages of development for both devices in this feature story.

Basic research behind the retinal implant was supported by NSF Program Officers across the Directorate for Engineering.  Gil Devey saw promise in the innovative concept and chose to fund the high-risk, very early stage research.  Other program directors stepped in at critical points, enabling the researchers to overcome different fundamental design and performance challenges.  Encouraged by the team's results and enduring vision, the NSF Engineering Research Center program made the leap to drastically scale up the fundamental research effort and address systems integration, enhance sensitivity, and improve biocompatibility.