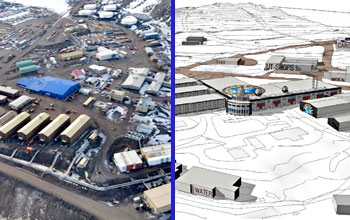 The existing McMurdo Station (left) is compared to an artist's conception of the future station.

The National Science Foundation (NSF) has released a master plan for updating its largest Antarctic research station, McMurdo, on Ross Island, that will, among other goals, increase energy efficiency, along with logistical and resource efficiency.

McMurdo is one of three year-round Antarctic stations operated by NSF, through its Division of Polar Programs. Polar Programs manages the U.S. Antarctic Program (USAP) in accordance with a 1982 Presidential Memorandum Regarding Antarctica.

McMurdo serves as the gateway to the continent for scientists supported by the USAP and federal mission agencies such as National Oceanic and Atmospheric Administration (NOAA) and the National Aeronautics and Space Administration (NASA). McMurdo also serves as a hub for science support, logistics and operations that include fixed-wing aircraft and helicopter flights as well as ship-borne resupply of cargo and fuel.

McMurdo has been in operation since the early stages of preparations for the International Geophysical Year in 1955. Since that time, the station's footprint has grown in response to first expeditionary and later Antarctic research needs.

The master plan is the first step in applying long-range investment planning for the USAP generally, and McMurdo Station specifically.

The need for investment planning was cited in a July 2012 report on USAP logistics conducted by a Blue Ribbon Panel. In its report, More and Better Science in Antarctica through Increased Logistical Effectiveness, the panel made numerous recommendations for streamlining and modernizing USAP-supported science and science support.

Although no specific timeline for completion is contained in the master plan, it is intended to be implemented in discrete phases that preserve the ability to conduct key functions during construction.

Renderings of the proposed building arrangement reflect a more compact arrangement of buildings than currently exists.

The core of the station, as envisioned, centers on a central axis with several inter-connected structures, including the existing Albert P. Crary Science and Engineering Center, the largest laboratory on the continent; a food, storage, administration and operations center; and dormitory-style housing. At the periphery of the core area are separate facilities for power generation and water treatment, as well as facilities for trades work, vehicle maintenance, cargo handling and warehousing space. This consolidation will allow for more efficient workflow generally, including the flow of cargo through McMurdo to field sites and South Pole Station.

The master plan also focuses on increasing flexibility so that facilities may be adapted to meet the evolving nature of Antarctic science. It aims to reduce "footprint" to increase energy efficiency, along with logistical and resource efficiency; improve the living and working experience of individuals at McMurdo Station; and make information-technology improvements to decrease complexity and increase reliability.

According to an executive summary, the master plan will "serve as a guide to future development of McMurdo" and act as a "living document, adaptable through time to serve a dynamic set of needs."