Nathaniel B. Palmer commemorated by former NSF-funded researcher who worked aboard 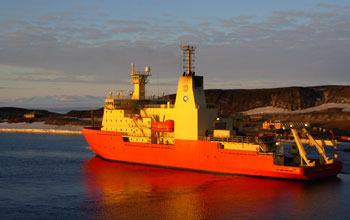 The Nathaniel B. Palmer at McMurdo Station.

The R/V Nathaniel B. Palmer, an ice-capable Antarctic research vessel chartered for the National Science Foundation (NSF), has routinely braved some of the world's most hostile waters in support of the science carried out by the United States Antarctic Program. Now, a geological feature on one of the inhospitable planets in the solar system bears the ship's name.

One is now called the Palmer Rupe.The feature may be seen in this image on the IAU website.

Since 1976, the IAU has approved names for 27 rupes on Mercury. The latest names are the first new designations for rupes in more than five years. In keeping with the established naming theme for rupes on Mercury, all of the newly designated features are named after ships of discovery, such as the U.S.S. Enterprise, which was launched in 1874 and conducted the first surveys of the Mississippi and Amazon rivers.

Michelle Selvans, of the Center for Earth and Planetary Studies at the Smithsonian Institution's National Air and Space Museum, led the effort to name this group of rupes. She explained that while some of the names came from historic vessels, some were proposed for their personal connections to members of the team.

Selvans sailed aboard the Palmer from December 2006 to January 2007 to conduct marine geophysics research off Antarctica.

"Being in Antarctica on the Palmer was a magical experience. The stark, vast landscape, the penguins playing in our wake and the fascinating people I shared the cruise with all made it one of the highlights of my training as a scientist," she said. "Seeing the setting in person, and watching the data come in during my geophysics watch-stander shifts, made the process of studying our little corner of the West Antarctic Rift System that much more exciting."

NSF is the presidentially mandated manager of the U.S. Antarctic Program (USAP). Through the USAP, the agency coordinates all U.S. research on the southernmost continent and in the Southern Ocean and provides the logistical support needed to carry out the science. The Palmer is chartered from Offshore Service Vessels, LLC, which is operated by Edison Chouest Offshore, Inc, of Galliano, La.

In choosing those rupes to receive names, the team picked from among the longest and most geologically interesting features that have been imaged by MESSENGER. "These features are easy to identify in images taken at dawn and dusk, when they throw shadows along their entire length," Selvans says. "A crisp shadow that is only about one kilometer wide but hundreds of kilometers long really stands out in images."

The list of newly approved names also includes the following: