France A. Córdova sworn in as NSF director 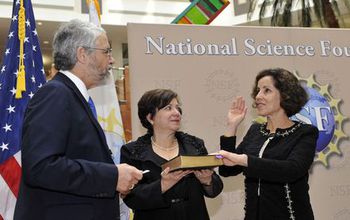 France A. Córdova is sworn in as NSF director in a ceremony in Arlington, Va.

France A. Córdova was sworn in today as the 14th director of the National Science Foundation (NSF) for a six year term. John Holdren, President Obama's science advisor, will lead a special ceremony at NSF to mark the occasion on April 2. Córdova was confirmed by the U.S. Senate on March 12, 2014.

"I am deeply honored to lead this prestigious organization," Córdova said. "I would like to thank and recognize Dr. Cora Marrett for her outstanding stewardship of the Foundation as acting NSF Director over the last year. I look forward to working with the Administration, Congress, the scientific community and NSF staff in advancing scientific discovery, technological innovation, and STEM education. I am especially eager to engage with the public on science and its importance to our nation's prosperity and global leadership."

"I extend my congratulations to Dr. Córdova as she begins her tenure as the Director of the National Science Foundation. I am confident that under her leadership NSF will continue to be the world leader in scientific discovery, technological innovation and STEM education," said Dr. John P. Holdren, Assistant to the President for Science & Technology and Director of the White House Office of Science & Technology Policy. "With Dr. Córdova at its helm, NSF is in an excellent position to maintain its gold standard merit review process and ensure the United States continues to support research that expands the frontiers of knowledge and keeps America on the cutting edge. I look forward to working with Dr. Córdova in this new role."

From 1993 to 1996, Córdova served as NASA's chief scientist. She was on the faculty of the Pennsylvania State University and was head of the department of astronomy and astrophysics from 1989 to 1993. Córdova was deputy group leader in the earth and space sciences division at Los Alamos National Laboratory from 1988 to 1989 and staff scientist from 1979 to 1989.

Most recently, Córdova served as chair of the Board of Regents of the Smithsonian Institution and as a member of the National Science Board, where she chaired the Committee on Strategy and Budget. She received a Bachelor of Arts degree from Stanford University and a Ph.D. from the California Institute of Technology.

Córdova was nominated by President Obama to become the NSF director on July 31, 2013, and re-nominated by the President on January 6, 2014. She succeeds Subra Suresh, who stepped down in March 2013.

As part of his remarks in nominating Córdova and others to key Administration posts last July, the President said, "The extraordinary dedication these individuals bring to their new roles will greatly serve the American people. I am grateful they have agreed to serve in this Administration and I look forward to working with them in the months and years to come."

NSF's annual budget is about $7.2 billion. The agency's budget request for FY15 is $7.3 billion, which is an increase of 1 percent over the 2014 enacted level. NSF's annual budget represents 24 percent of the total federal budget for basic research conducted at U.S. colleges and universities, and this share increases to 60 percent when medical research supported by the National Institutes of Health is excluded. In many fields, NSF is the primary source of federal academic support.