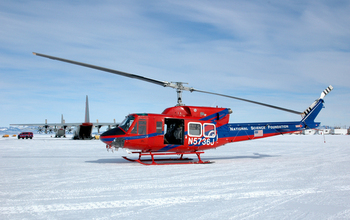 The New Zealand Search and Rescue Council has recognized the U.S. Antarctic Program, which is managed by the National Science Foundation's Division of Polar Programs, for its cooperation with Antarctica New Zealand in response to the January 2013 loss of a Twin Otter aircraft and its crew in the Antarctic.

"The pre-planning and the subsequent search-and-rescue operation were both conducted through the McMurdo Station Emergency Operations Centre (EOC) in Antarctica coordinating with the Rescue Coordination Centre NZ," the Council noted. "This enabled the response team to be supported, well briefed and resourced for a deep polar field rescue operation."

"Antarctica offers an unparalleled range of opportunities to conduct world-class science across a range of disciplines," said Kelly K. Falkner, director of the Division of Polar Programs. "Unfortunately, those opportunities are not without their risks in one of the world's harshest environments. The USAP and its international partners stand ready to assist each other at all times when dangers arise and the need occurs. We are honored to receive this award and very pleased that it recognizes the cooperative nature of our search-and-rescue response."

Added Graeme Ayres, Antarctica New Zealand's general manager for operations, "This award recognizes the courage and dedication of the people from the U.S. and N.Z. programs who are employed as part of the Joint Search and Rescue Team (JSART). I'm proud to be receiving this award on behalf of them and Antarctica New Zealand. This response demonstrates the benefits of the collaboration between our two programs and our continued commitment to safety of personnel working in Antarctica. Our thoughts are with the family, friends and colleagues of the Kenn Borek Air crew lost in this tragedy."

The Twin Otter crash occurred on Jan. 23 in the Queen Alexandra Range, roughly 675 kilometers (419 miles) south of McMurdo Station, NSF's logistics hub on the continent, and New Zealand's Scott Base, which is near McMurdo Station.

JSART members were ferried to the remote crash site--at an elevation of roughly 3,900 meters (13,000 feet)--by helicopter, after having established a local staging area on Beardmore Glacier.

The joint search-and-rescue effort managed to place experts at the crash site to examine the wreckage. But that examination indicated it would be unsafe to further disturb the wreckage, which was largely embedded in snow and ice on a steep slope.

The team was able to recover some equipment from the exposed tail of the Twin Otter, including the cockpit voice recorder. They were unable to safely recover the remains of the crew.

"This operation demonstrated the strong relationship that exists between the United States Antarctic Program and Antarctica New Zealand to support a unified SAR response in Antarctica," according to the Council.

NSF, through its Division of Polar Programs. manages the U.S. Antarctic Program in accordance with a 1982 Presidential Memorandum Regarding Antarctica.