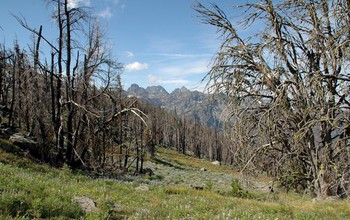 The spread of insects such as mountain pine beetles has devastated forests in the Western U.S.

The effects of climate change and other factors have led to the unprecedented epidemic. Tens of millions of acres of trees have been killed over the past 20 years.

Scientist Christopher Bone of the University of Oregon is using the power of computing to inform the response to the mountain pine beetle epidemic, thanks to a grant from the National Science Foundation's (NSF) Dynamics of Coupled Natural and Human Systems (CNH) program.

The award addresses how humans and the environment interact--and where mountain pine beetles fit into the picture.

The grant is one of 11 NSF CNH awards made this year. Total funding for 2014 CNH grants is $9.47 million; the program has made awards nearly continuously since 2001.

"This year's CNH awards address, among other topics, how humans affect and respond to changing environmental conditions in large metropolitan areas, how natural predators combat disease, how noise from a range of sources affects humans and wildlife, and the complex interactions between wind turbines and local environments," says Tom Baerwald, CNH program director for SBE.

"The project results will be useful for all of us," says Baerwald, "as we work to maintain and improve environmental quality over the long run."

This year's grantees will look at the way in which people deal with environmental processes in a range of settings, including cities, mountains, grasslands and forests.

Findings from the CNH projects, scientists believe, will enhance our understanding of, and increase our capabilities to improve, environmental quality and the well-being of people.

Among 2014 research subjects are the coupled health and human dynamics of schistosomiasis; feedbacks between local democracy and large-scale biodiversity conservation; bridging communities through mountain sustainability networks; the interactions among economic development, urbanization and forest degradation; drinking water quality and food security in arsenic-affected Southeast Asia; and increasing the resilience of grasslands in the Southern Great Plains.

"We now live in a world where wildlife and its habitats are strongly affected by human societies, but where societies still depend on nature--a world of coupled natural and human systems," says Peter Alpert, CNH program director for BIO.

"CNH is uniquely devoted to advancing our ability to understand this mutual dependence."

The CNH program considers humans and the environment as one interconnected system.

Research funded by CNH awards will provide a better understanding of natural processes and cycles and of human behavior and decisions--and how and where they intersect.

"Each of the new projects brings together teams of researchers from across the social and natural sciences," says Sarah Ruth, CNH program director for GEO, "to help us better understand how complex systems function, and ultimately, how we might best manage finite environmental resources."

Bradford Wilcox, Texas A&M University-AgriLife Research, CNH: Slowing the Expansion of Woodlands and Increasing the Resilience of Grasslands in the Southern Great Plains