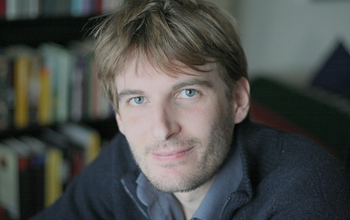 Andrea Alù is an engineering professor at UT Austin.

The National Science Foundation (NSF) has named Andrea Alù, an engineering professor at the University of Texas (UT) at Austin as the recipient of this year's Alan T. Waterman Award.

Alù is a leading innovator in metamaterials, or artificial materials with properties and wave interactions not found in nature, and plasmonics, the study of how light interacts with the surface of nanoscale objects. He is best known for his pioneering research in metamaterial theory and applications.

Among the many accomplishments Alù and his team have achieved are "cloaking" technologies capable of "bending" electromagnetic waves around objects, with the overall effect of rendering those objects invisible to sensors.

"The Waterman Award was created 40 years ago to recognize outstanding young researchers," NSF Director France A. Córdova said. "Dr. Alù's research is an example of the type of pioneering spirit the award seeks to identify. His research has already advanced our understanding of artificial materials and their wave interactions and promises to yield further significant results."

In 2012, Alù's group at UT Austin was able to show for the first time invisibility of a 3-D object, using radio waves. Normally, waves bounce off the surface of an object. In the case of visible-spectrum light waves, that interaction is what allows a human to see an object. When the group applied its metamaterial cloak to a cylinder, waves went through as if the object were not there, making it invisible to radar and other technologies that sense radio waves. The team's measurements showed total transparency, even for viewing at different angles or from a very close position. If a cloaked object were placed between an observer and an approaching wave, the observer would see the wave, but not the object.

The team developed two methods of cloaking, "plasmonic cloaking" and "mantle cloaking," and has already shown how those can be used to create "invisible sensors," antennas that can avoid detection but still receive signals. The technology could be applied to near-field microscopes, drastically improving biomedical sensors and measurements, or to innovations such as rooftop antennas that would not interfere with each other.

"Since the start of my graduate studies, I have been fascinated by the exotic interactions of man-made materials with light and electromagnetic radiation," Alù said. "One of their most fascinating properties to me is the way they can modify how light is scattered or diffused around an object, and back in 2005, we realized how these properties may be cleverly used to suppress the visibility of objects. Since then, there has been a lot of work in the area, and my group has been at the forefront of this field of research, proposing several approaches to realize transparent objects for various wavelengths of interest."

Alù's group has worked to find applications for its research in a number of different areas of industry and has sought to identify the realistic potential and relevant limitations of the cloaking technology.

In recent years, Alù and his team have introduced other innovative possibilities offered by metamaterials, including the possibility of inducing large isolation and non-reciprocal propagation of sound and light in compact integrated devices, the realization of giant nonlinearities in thin metamaterials, and the concept of metamaterials that can compute mathematical operations as light travels through them.

His group has shown the concepts behind invisible sensors may be applied beyond electromagnetic waves, to acoustic, mechanical and matter waves and has put forward ideas of using plasmonic cloaks at the nanodevice scale.

"Today metamaterials are a very active field of study, and we are working on several new exciting developments in the area," he said. "For instance, there are many exciting uses of low-scattering objects in telecommunications, biomedicine and computing that we are currently pursuing."

"I am very thankful and excited for having been selected to receive this honor," Alù said. "It means a lot in terms of recognizing my group's work in the area of metamaterials and plasmonics, but it is also a reflection on the impact of this field of research on science and technology, driving several important discoveries in recent years. This award will surely help us further expand our research efforts in this area, and extend the reach and impact of this field on science, education and societal needs."

Alù has received awards and recognition from a diverse group of technical societies, including the Outstanding Young Engineer Award from the IEEE Microwave Theory and Techniques Society in 2014; the Adolph Lomb Medal from the Optical Society (OSA) in 2013; the inaugural Franco Strazzabosco Award and the Medal of Representation of the President of the Republic of Italy in 2013; the Young Scientist Prize in Optics from the International Union of Pure and Applied Physics in 2013; the Early Career Investigator Award from The International Society for Optics and Photonics (SPIE) in 2012; the Isaac Koga Gold Medal from the International Union of Radio Science (URSI) in 2011; and a Faculty Early Career Development (CAREER) award from NSF in 2010.

Alù is a fellow of IEEE and OSA, a full member of URSI and a senior member of SPIE. He serves on the editorial boards of the research publications Physical Review B, Scientific Reports and Advanced Optical Materials, and as an associate editor of five journals, including Optics Express and the IEEE Antennas and Wireless Propagation Letters.

The Waterman Award will be presented to Alù at a dinner ceremony held in Washington, D.C., on May 5. He will also deliver a lecture at NSF on May 7.