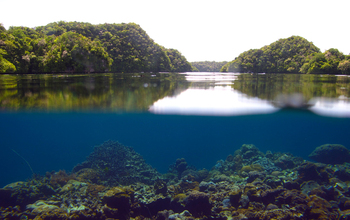 Palau's beautiful coral reefs are surprisingly resistant to the effects of ocean acidification.

Will some coral reefs be able to adapt to rapidly changing conditions in Earth's oceans? If so, what will these reefs look like in the future?

As the ocean absorbs atmospheric carbon dioxide (CO2) released by the burning of fossil fuels, its chemistry is changing. The CO2 reacts with water molecules, lowering ocean pH (making it more acidic) in a process known as ocean acidification.

This process also removes carbonate, an essential ingredient needed by corals and other organisms to build their skeletons and shells.

One such place is Palau, an archipelago in the far western Pacific Ocean. The tropical, turquoise waters of Palau's Rock Islands are naturally more acidic due to a combination of biological activity and the long residence time of seawater in their maze of lagoons and inlets.

Seawater pH within the Rock Island lagoons is as low now as the open ocean is projected to reach as a result of ocean acidification near the end of this century.

A new study led by scientists at the Woods Hole Oceanographic Institution (WHOI) found that coral reefs in Palau seem to be defying the odds, showing none of the predicted responses to low pH except for an increase in bio-erosion--the physical breakdown of coral skeletons by boring organisms such as mollusks and worms.

A paper reporting the results is published today in the journal Science Advances.

"This research illustrates the value of comprehensive field studies," says David Garrison, a program director in the National Science Foundation's Division of Ocean Sciences, which funded the research through NSF's Ocean Acidification (OA) Program. NSF OA is supported by the Directorates for Geosciences and for Biological Sciences.

"Contrary to laboratory findings," says Garrison, "it appears that the major effect of ocean acidification on Palau Rock Island corals is increased bio-erosion rather than direct effects on coral species."

Adds lead paper author Hannah Barkley of WHOI, "Based on lab experiments and studies of other naturally low pH reef systems, this is the opposite of what we expected."

Experiments measuring corals' responses to a variety of low pH conditions have shown a range of negative effects, such as fewer varieties of corals, more algae growth, lower rates of calcium carbonate production (growth), and juvenile corals that have difficulty constructing skeletons.

"Surprisingly, in Palau where the pH is lowest, we see a coral community that hosts more species and has greater coral cover than in the sites where pH is normal," says Anne Cohen, co-author of the paper.

When the researchers compared the communities found on Palau's reefs with those in other reefs where pH is naturally low, they found increased bio-erosion was the only common feature.

"Our study revealed increased bio-erosion to be the only consistent community response, as other signs of ecosystem health varied at different locations," Barkley says.

The riddle of resilience

How do Palau's low pH reefs thrive despite significantly higher levels of bio-erosion?

The researchers aren't certain yet, but hope to answer that question in future studies.

One theory--that skeletons grown under more acidic conditions are less dense, making them easier for bio-eroding organisms to penetrate--is not the case on Palau, Barkley says, "because we don't see a correlation between skeletal density and pH."

Though coral reefs cover less than one percent of the ocean, these diverse ecosystems are home to at least a quarter of all marine life. In addition to sustaining fisheries that feed hundreds of millions of people around the world, coral reefs protect thousands of acres of coastlines from waves, storms and tsunamis.

"On the one hand, the results of this study are optimistic," Cohen says. "Even though many experiments and other studies of naturally low pH reefs show that ocean acidification negatively affects calcium carbonate production, as well as coral diversity and cover, we are not seeing that on Palau.

"That gives us hope that some coral reefs--even if it is a very small percentage--might be able to withstand future levels of ocean acidification."

Along with Barkley and Cohen, the team included Yimnang Golbuu of the Palau International Coral Reef Center, Thomas DeCarlo and Victoria Starczak of WHOI, and Kathryn Shamberger of Texas A&M University.

The Dalio Foundation, Inc., The Tiffany & Co. Foundation, The Nature Conservancy and the WHOI Access to the Sea Fund provided additional funding for this work.