How a flying bat sees space 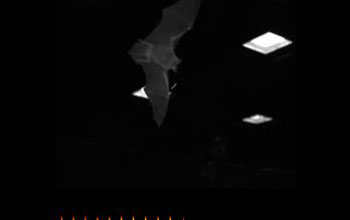 
Researchers recorded bats navigating around a room to learn how their brains comprehend 3-D space.

Recordings from echolocating bat brains have for the first time given researchers a view into how mammals understand 3-D space.

By training bats to fly around obstacles in a room, and sit patiently on a platform, a National Science Foundation (NSF)-funded research team were able to interpret how the animals use echolocation--a high-frequency sound navigation system that bats use to hunt--to sense their environment. The results were presented today at the annual meeting of the Society for Neuroscience.

The researchers focused on a particular portion of the bat brain, the mid-brain superior colliculus. All mammal brains have a superior colliculus, and it plays a role in "orienting behavior," or how species move through space. In humans, that means using visual cues. For bats, it means acoustic ones, or echolocation.

Bats direct their sound beam to inspect objects in their environment, just as primates move their eyes to see their environment, said Cynthia Moss of Johns Hopkins University. She researches spatial perception, memory, motor behaviors and more. Her Batlab conducted the research.

Why focus on bats?

"They offer a tremendous advantage over other mammals, because they use an active sensing system that gives us direct access to the information they're using to guide their behavior," said Moss. "We can use the signals to really get inside the bat's head."

Her team created an "echo model" that calculates how the bat receives and processes all those signals. They lined a 20-by-20-foot room with microphones--to capture all of the bat's sounds--and added high-speed infrared cameras, to capture the position of the bat and where it beams its sonar vocalizations. The echo model incorporates the time of the bat's call, the time of the echo and the direction of that echo in space.

Combined with neural recordings from the mid-brain superior colliculus--from a bat trained to wait on a platform to receive a mealworm treat--it allows Moss and her team to understand how bats represent 3-D space in their brain. Their recordings sampled individual neurons, figuring out the job of each neuron--to record whether an object is far away or close by, for example.

The research represents the first time scientists have understood how echolocation works on a neural level in a free-flying bat.

"We really wanted to bring these experiments to the point where we could look at the neural activity in the context of natural behaviors," Moss said. "So this has been a really big breakthrough, to make these recordings."

A better understanding of echolocation could help improve unmanned aerial vehicles and other technology that uses sonar, said Ninad Kothari, a graduate student in Moss's lab who built the echo model. It could also help blind people better navigate their world, "if they can use the rules that bats use," Kothari said.

And it could help us understand how mammals, in general, comprehend their environment.

"We deal with a lot of complex information," said Melville Wohlgemuth, a postdoctoral student in Moss's lab who worked on the research. "When you put all this complex information together you have to parse out what's important. The bat system is really good for that. When they make a vocalization, they get echoes back from all around their world. They need to pick out the one echo that is important to them. So this also gives us a good idea of how sensorimotor integration for attending to a specific stimulus in your world is conducted in the brain."