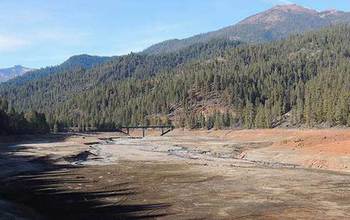 California's Trinity Lake is a mere shadow of its former self, since drought arrived.

Atmospheric scientists have found that California's highest temperatures are almost always associated with blocking ridges, regions of high atmospheric pressure than can disrupt wind patterns -- including one known as the Ridiculously Resilient Ridge. The Triple R, as it's called, is also linked with California's drought.

In new research published online this week in the journal Science Advances, a team of researchers led by Stanford University scientist Noah Diffenbaugh analyzed the occurrence of large-scale atmospheric circulation patterns that occurred during California's historical precipitation and temperature extremes.

"Improved understanding of the drought in California has implications for water resources management, agriculture, hydropower and energy," said Anjuli Bamzai, program director in the National Science Foundation (NSF) Division of Atmospheric and Geospace Sciences, which funded the research.

Bamzai said that while the region has recently experienced relief in snowfall and rainfall, "The epic drought is far from over. These scientists show that the frequency of atmospheric circulation patterns that worsen drought conditions has increased over the long-term."

The study focused on the northeastern Pacific Ocean and far western North America, encompassing the winter "storm track" region from which the vast majority of California precipitation originates.

The researchers used historical climate data from U.S. government archives to investigate changes during California's rainy season, from October to May.

In particular, the scientists found increases in atmospheric patterns resembling what has happened during the latter half of California's ongoing multi-year drought.

"California's driest and warmest years are almost always associated with some sort of persistent high pressure region, which can deflect the Pacific storm track away from California," said Swain. "Since California depends on a relatively small number of heavy precipitation events to make up the bulk of its annual total, missing out on even one or two of these can have significant implications for water availability."

The scientists concluded that one such persistent ridge pattern was diverting winter storms northward and preventing them from reaching California during the state's drought.

In 2014, the researchers published findings showing that the increasing occurrence of extremely high atmospheric pressure over this same part of the northeastern Pacific is very likely linked with environmental change. But the group wanted to know whether the particular spatial pattern associated with the Triple R has become more common -- a question not asked in the 2014 study.

The new study provides a more direct answer to this question. "We found that this specific extreme ridge pattern associated with the ongoing California drought has increased in recent decades," Swain said.

"We're seeing an increase in certain atmospheric patterns that have historically resulted in extremely dry conditions, and yet that's apparently not occurring at the expense of patterns that have been associated with extremely wet patterns," Swain said. "We're not necessarily shifting toward perpetually lower precipitation conditions in California -- even though the risk of drought is increasing."

That might sound contradictory, but it's not, the scientists say.

Imagine looking at a 10-year period and finding that two of the years are wet, two are dry and the rest experienced precipitation close to the long-term average. Now imagine another decade with three very dry years, three very wet years and only four years with near-average precipitation.

"What seems to be happening is that we're having fewer 'average' years, and instead we're seeing more extremes on both sides," Swain said. "This means that California is starting to experience more warm/dry periods, punctuated by wet conditions."

The role of temperature

Another important contributor to drought is temperature. Diffenbaugh previously found that higher temperatures during periods of low precipitation in California doubled the risk of drought.

The researchers also discovered that the long-term warming of California has substantially increased the number of hot years, thereby increasing the risk that low precipitation periods produce drought.

"The current record-breaking drought in California has arisen from both extremely low precipitation and extremely warm temperature," Diffenbaugh said. "We found clear evidence that the extreme atmospheric pattern associated with these unprecedented warm and dry conditions has become more likely in recent decades."