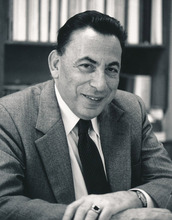 Erich Bloch was director of the National Science Foundation from 1984 to 1990.

The National Science Foundation (NSF) mourns the passing of Erich Bloch, who served as the agency's eighth director. Bloch died at his home on Friday, Nov. 25, at age 91.

Bloch served a full six-year term as director, from 1984 to 1990. He was a strong advocate for research and championed funding for high-risk, revolutionary projects. He played an integral role supporting the National Science Foundation Network (NSFNET), a "network of networks" that gave rise to today's internet. Bloch was also instrumental in creating NSF's Engineering Research Center and Science and Technology Center programs, which build collaborations that address national-level challenges in science and engineering and spur economic development.

"We lost an important member of the foundation's family," NSF Director France Córdova said. "Erich Bloch was a visionary leader who pushed the boundaries, championing research that led to some of the greatest innovations of our time. On behalf of the agency and our NSF community at large, we extend our deepest sympathies to his family."

Bloch was a distinguished engineer who worked for IBM and was the first director to come to NSF from industry. Among his many accomplishments as director, Bloch brought industry and researchers together to advance computing, creating the Computer and Information Science and Engineering (CISE) Directorate.

"Bloch was incredibly forward-thinking," said Jim Kurose, NSF assistant director for CISE. "Not only did he recognize the importance of computing as a critically important research area, he also played a key role in establishing the nation's supercomputer centers and in the eventual passing of the seminal High-Performance Computing Act of 1991, which included the government-wide High-Performance Computing and Communications initiative."

In 2002, the National Science Board (NSB) honored Bloch as the 24th recipient of the esteemed Vannevar Bush Award for his long-running contributions to science and technology.

"Erich Bloch understood the synergy between government, industry and academia and he was great at communicating his vision for NSF and establishing the centers-based research platform for the nation," Córdova said. "Bloch's contributions will live on through the work and mission of the foundation. The heartfelt messages NSF is receiving from around the country are a testament to his enduring legacy."