Report: In 2015, US institutions awarded most doctorates ever recorded

Over 20-year span, the number of women receiving doctorates in science and engineering increased by 93 percent 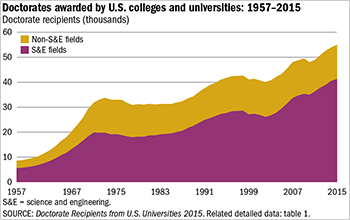 U.S. institutions awarded the most doctorates ever recorded in 2015.

U.S. institutions in 2015 awarded 55,006 research doctorate degrees, the highest number ever reported, according to the Survey of Earned Doctorates (SED), an annual census of research degree recipients.

The report, published by the National Science Foundation's (NSF) National Center for Science and Engineering Statistics (NCSES), supplies data and analysis for a vital U.S. economic interest: the American system of doctoral education.

The U.S. system of doctoral education is widely considered to be among the world's best, as evidenced by the large number of international students enrolling at U.S. universities. Other nations that recognize the contributions of doctoral recipients to the economy and society invest heavily in doctoral education. Without continued investment and improvement, the U.S. doctoral education system's preeminence is not guaranteed.

The NCSES annual count of U.S. doctoral recipients measures the investment in human resources devoted to science, engineering, research and scholarship. NCSES identified overall trends in the 2015 numbers, including:

Women earned 46 percent of all doctorates in 2015, continuing a trend of women's increasing prevalence in the annual total of recipients.

Among U.S. citizen and permanent resident doctorate recipients, the proportion of doctorates awarded to African Americans rose from 6.2 percent to 6.5 percent between 2005 and 2015. Over the same period, the rate for Hispanics or Latinos grew from 5.1 percent to 7.0 percent.

For more information -- including how much education-related debt doctorate recipients incur, what kind of employment they find, and how much they earn -- view the full report.