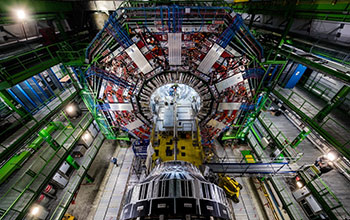 The National Science Foundation today awarded a total of $153 million over five years to Columbia University and Cornell University for the construction of high luminosity upgrades to two particle detectors at the Large Hadron Collider (LHC). The upgrades will enable the ATLAS (A Toroidal LHC Apparatus) and CMS (Compact Muon Solenoid) detectors to operate at higher intensity.

The LHC, located at CERN (the European Organization for Nuclear Research), is the largest and most powerful particle accelerator in the world. Scientific research at the LHC seeks to investigate the fundamental characteristics of the forces and elementary particles that make up the universe. It does this by colliding energetic beams of protons along a 17-mile ring and studying the resulting debris with extremely complex detectors, each consisting of thousands of tons of instrumentation and machinery. NSF has supported the LHC since 1997, when it first awarded funds to construct parts of the ATLAS and CMS detectors.

In 2012, researchers at ATLAS and CMS jointly discovered a long-theorized but previously undetected particle known as the Higgs boson, the final component of the Standard Model of elementary particle physics. The Higgs mechanism explains how fundamental particles acquire mass. The announcement of this groundbreaking discovery led to the award of the 2013 Nobel Prize in Physics and ignited the exciting new possibility of studying how the Higgs boson interacts with other elementary particles, potentially revealing entirely new physical phenomena. In order to carry out such studies, the LHC would have to produce far greater numbers of Higgs bosons than currently possible.

To this end, CERN is leading a major international effort involving 45 funding agencies to increase the luminosity, or intensity, of the LHC's colliding proton beams by a factor of approximately 10 compared to the 2012 level (a factor-of-four increase relative to the LHC's current luminosity). The NSF-funded upgrades to ATLAS and CMS will enhance the capabilities of the detectors to operate at this higher intensity. "These upgrades will bring several improvements: They will increase the detectors' tolerance to the high radiation levels that will be generated, increase their ability to identify those rare and scientifically interesting events from the torrent of data that will be produced, and increase the rate at which that interesting subset of data is recorded," explained Mark Coles, the NSF program officer overseeing ATLAS and CMS operations and the upgrade project.

High-luminosity operation and collection of data using the upgraded ATLAS and CMS detectors is expected to begin in 2027 and continue for 10 years. This will generate enormous volumes of data -- more than 10 times the total data collected by LHC operation through 2024. The data will enable precision tests of the Standard Model of particle physics.

Such investigations may reveal insights into phenomena beyond the Standard Model, such as the nature of dark matter. "The National Science Foundation has a rich legacy of supporting research at the cutting edge of high-energy physics," said NSF's Assistant Director for Mathematical and Physical Sciences Anne Kinney. "These upgrades will enable novel experiments that promise to expand our understanding of the most fundamental units that make up our universe."

NSF and the U.S. Department of Energy have been partners in the U.S. LHC program for over two decades and are continuing this partnership in the U.S. High Luminosity LHC Upgrade Program. In total, seven national laboratories and 98 U.S. universities (51 of which are fully or partially supported by NSF) are involved in the upgrades. NSF will also support student training opportunities within the upgrade project, including hands-on participation by hundreds of undergraduates and high school students. As the LHC transitions to high luminosity operation in 2027 and beyond, U.S. researchers will continue to play a critical role among the thousands of researchers from around the world participating in the ATLAS and CMS scientific collaborations.