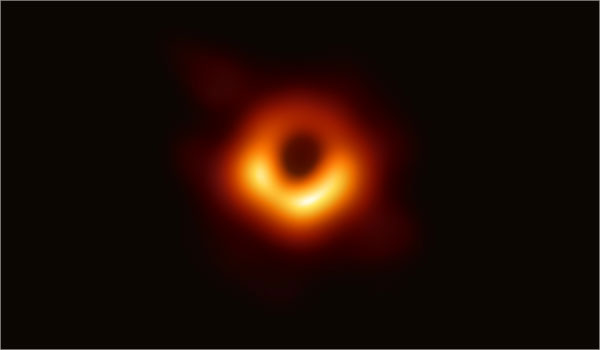 Black hole at the center of Messier 87, a massive galaxy in the nearby Virgo galaxy cluster.
Credit: Event Horizon Telescope collaboration et al.

The National Science Foundation has announced a new award -- the NSF Diamond Achievement Award -- which will be presented for the first time to the international team of researchers who recently captured the first-ever image of a black hole.

On April 10, in coordinated press conferences across the globe, the Event Horizon Telescope collaboration announced that its planet-scale array of eight ground-based radio telescopes, which was forged through international collaboration, had succeeded in imaging the black hole at the center of Messier 87, a massive galaxy in the nearby Virgo galaxy cluster. This black hole resides 55 million light-years from Earth and has a mass 6.5-billion times that of the Sun.

Awarded at the discretion of the NSF director, the Diamond Achievement Award is a non-cash, pinnacle level award that recognizes the highest possible level of achievement or contributions made by private citizens or organizations to NSF's mission. Presented for the first time this year, this award may also be given to individuals or teams in recognition of significant breakthroughs or discoveries that transform the understanding of a field of scientific or technical knowledge.

"The Event Horizon project demonstrates the power of collaboration, convergence, and shared resources allowing us to tackle the universe's biggest mysteries," said NSF Director France Córdova. "Consequently, this groundbreaking accomplishment seemed the perfect research to launch our NSF Diamond Achievement Award. It's emblematic of why NSF exists. We enable scientists and engineers to illuminate the unknown and to reveal the subtle and complex majesty of our universe."

The researchers posited that if immersed in a bright region such as a disc of glowing gas, a black hole could be expected to create a dark region similar to a shadow -- something that Einstein predicted in his theory of general relativity and that had never been seen before. This shadow, caused by gravitational bending and the capture of light by the event horizon, revealed information about the nature of these causal phenomena and allowed the team to measure the mass of M87's enormous black hole. Multiple calibration and imaging methods revealed a ring-like structure with a dark central region -- the black hole's shadow -- that persisted over multiple independent observations through the Event Horizon Telescope array.

NSF played a pivotal role in this discovery by funding individual investigators, interdisciplinary scientific teams and radio astronomy research facilities since the inception of EHT. Over the past two decades, NSF directly funded more than $28 million in EHT research, the largest commitment of resources for the project.

Sheperd Doeleman of the Center for Astrophysics | Harvard & Smithsonian is the EHT project director and will accept the award on behalf of the international collaboration.

"This is an extraordinary scientific feat accomplished by a team of more than 200 researchers," Doeleman said. "We achieved something presumed to be impossible just a generation ago. But breakthroughs in technology, connections between the world's best radio observatories, and innovative algorithms all came together to open an entirely new window on black holes and the event horizon."