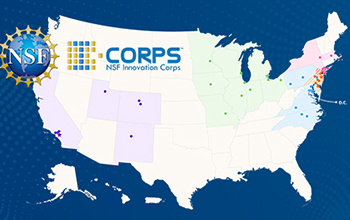 Building on the success of the decade-long NSF Innovation Corps (I-Corps™) program, the U.S. National Science Foundation today announced the establishment of five I-Corps Hubs that will scale the National Innovation Network and rapidly advance solutions benefiting society. Each I-Corps Hub is funded at $3 million per year for five years and comprises a regional alliance of at least eight universities. The I-Corps Hubs provide experiential entrepreneurial training to academic researchers across all fields of science and engineering.

The I-Corps Hubs form the new operational backbone of the National Innovation Network, a network of universities, NSF-funded researchers, established entrepreneurs, local and regional entrepreneurial communities, and other federal agencies that helps researchers learn how to translate fundamental research results to the marketplace. The Hubs will work collaboratively to build and sustain a diverse and inclusive innovation ecosystem throughout the U.S.

"For 10 years, the NSF I-Corps program has been critical to fostering the creative spirit and entrepreneurship that enables NSF-funded research to be translated into new products and services and contribute to the nation's economy," said NSF Deputy Assistant Director for Engineering Linda Blevins. "I am delighted to launch the first of our I-Corps Hubs, which will form the foundation for strengthening and scaling this innovation ecosystem. The I-Corps Hubs will bring together diverse scientists and engineers, entrepreneurs, business leaders and industry partners from every part of our country, providing everyone with an opportunity to solve key challenges and spur economic growth, including new startups and new jobs."

The I-Corps program, established in 2011, connects NSF-funded academic researchers across science and engineering with the technological, entrepreneurial, and business communities to help create a National Innovation Network. The program is designed to support the commercialization of deep technologies, which grow from discoveries in fundamental science and engineering.

The I-Corps Hubs will serve national needs through five areas of responsibility:

NSF plans to issue a new I-Corps Hubs solicitation in Fall 2021 to continue to expand opportunities for entrepreneurship education and technology translation throughout the United States. The five I-Corps Hubs announced today, and participating institutions, are listed below.

The I-Corps Hubs build on the lessons learned through the first decade of the I-Corps program. Specifically, in the program's initial phase, I-Corps Nodes, consortia of universities responsible for delivering a standardized curriculum, and I-Corps Sites, universities providing internal institutional support to scientists and engineers, were funded separately. Under the new approach, the I-Corps Hubs offer a more integrated approach that incorporates lessons learned from the program's initial success. The new operational model provides increased funding and enables scaling I-Corps across the entire nation. NSF-supported Sites and Nodes will continue to participate in the National Innovation Network while NSF transitions to the Hubs.