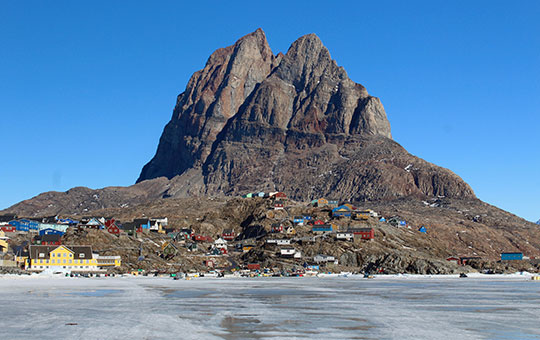 The National Science Foundation has awarded $37.5 million to institutions across the U.S. in a first round of grants under its Navigating the New Arctic (NNA) initiative. The awards will enable cutting-edge scientific research on how to adapt to the significant change underway in the Arctic to advance scientists' understanding and community and policymaker decision-making.

"Taken as a group, these awards give us a holistic approach to understanding Arctic change -- determining the extent and possible trajectory of current warming trends through long-range observations and synthesis of existing data, but also, in cooperative dialogue and interaction between scientists, engineers, and affected communities, determining what actions might be most effective in coping with those changes," said Bill Easterling, assistant director for NSF's Geosciences directorate.

These awards, he added, "reflect the nature of modern-day scientific investigation by breaking down disciplinary boundaries between, for example, biology and geosciences or science and engineering to encourage a comprehensive multi-faceted approach to understanding very complex, global problems."

Several topics are addressed by the first group of awards: linking sea-ice predictions with models of shipping hazards; combining satellite measurements with the properties of permafrost across the Arctic; and working with Arctic communities to produce research on becoming energy independent.

This set of innovative projects will focus on the rapid and widescale environmental changes occurring in the Arctic, focusing on new opportunities and unprecedented challenges brought about by documented trends in the Arctic, which is warming faster than almost anywhere else on Earth. Some models predict that continued warming could result in an ice-free Arctic Ocean by mid-century.

The awardees include two Indigenous institutions: the Aleutian Pribilof Islands Association, and the Wildlife Management Institute, Inc. in Alaska.

Three years ago, NSF identified Navigating the New Arctic as one of its 10 Big Ideas for Future NSF Investments -- long-term research areas for investment at the frontiers of science and engineering. NSF designed Navigating the New Arctic to support studies of the profound changes taking place in the Arctic as well as their local and global impacts.

"The United States is an Arctic nation and what happens in the Arctic does not stay in the Arctic. Warming, as one example, affects the range of species in the Bering Sea, one of the nation's most productive fisheries, which has many different ripple effects in the lower 48 states," said Kelly K. Falkner, who heads NSF's Office of Polar Programs. "OPP has supported groundbreaking Arctic research for many years and will continue to do so. These awards, and Navigating the New Arctic in general, however, foster new perspectives, approaches and techniques that can only enhance our understanding of these very complex changes and their potential impacts in the Earth's more temperate regions."

The awards are the first in what NSF envisions will be at least a five-year program to support the research needed to help make wise decisions about the economy, security and resilience of the nation, the larger region and the globe with respect to Arctic change. Navigating the New Arctic is designed to support innovation in Arctic observing networks and fundamental research that breaks down boundaries among social, natural, environmental, computing and information sciences, and engineering to address the intersection of natural, social, and built systems. The new awards reflect the diversity of approaches needed to address these complex science questions as well as to support research teams in early and later stages of development.

A full list of the Navigating the New Arctic awards can be found on the NSF Awards Search.

To connect with NSF program staff and researchers funded under these awards, contact NSF Public Affairs at media@nsf.gov or (703) 292-8070.