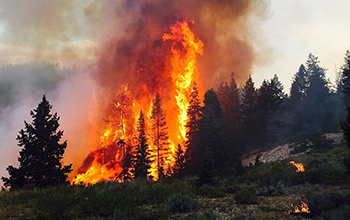 NSF PREEVENTS investigators are conducting research on natural hazards from wildfires to hurricanes to tornadoes and beyond.
Credit: USFS

Each year in the U.S. and around the globe, earthquakes, storms, volcanic eruptions and other natural disasters claim lives and leave people displaced. Natural disasters destroy property, devastate communities and strain social systems from healthcare to food supplies.

From 2008-2018, natural disasters caused economic losses totaling $850 billion in the U.S. and $1.5 trillion worldwide. In 2017 alone, wildfires such as the Northern California firestorm raged, Hurricane Harvey flooded parts of Texas, Hurricane Irma carved a path of destruction through the Southeast, and Hurricane Maria devastated Puerto Rico, the U.S. Virgin Islands and Dominica.

This September saw another reminder of the danger disasters pose: Hurricane Dorian tore through The Bahamas.

"NSF's support for basic research on natural hazards will help the American people and those around the world better prepare for and respond to disasters," says Justin Lawrence, lead program director for NSF's 2019 PREEVENTS grants. The awards are supported by NSF's Directorate for Geosciences.

"PREEVENTS projects will provide important information that can be used by communities in the United States and elsewhere to further public safety and protect economies," Lawrence says.

PREEVENTS' goals are to improve predictability and risk assessments of natural hazards, increase resilience to these events, and reduce their effects on human lives, societies and economies. PREEVENTS also supports research that will improve our understanding of the processes underlying natural hazards and extreme events.

Below is a list of the 2019 NSF PREEVENTS awardees, their institutions, and project titles.