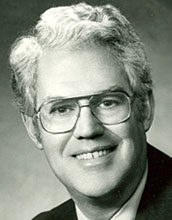 
“The Foundation will support the best possible research in the best possible manner within its resources. Wherever outstanding researchers may be, they will be funded at levels needed to perform their research. Our funding actions will accord with our goal to attract the very best minds in the nation to scientific research, and to provide them with excellent training.”


Dr. Edward A. Knapp was the seventh director of the National Science Foundation (NSF) and served from November 1982 to August 1984. Early in his tenure as director, Knapp expressed concern that American pre-eminence in science was "in trouble because we no longer have enough excited, enthusiastic graduate students and postdoctoral fellows" in the sciences. He also noted that scientific instruments in most universities were obsolete. NSF policy, he declared, would be to engage the educational system in attracting and producing top quality scientists and equipping scientists with the tools they needed to attain scientific excellence.

Knapp's first appointment to NSF was as assistant director of the Mathematics and Physical Sciences Directorate, nominated by President Ronald Reagan in July 1982. He served in this role between September and November of that year, before his appointment as NSF director.

Early Life, Education and Training
Knapp was born in Salem, Oregon, and did his undergraduate studies at Pomona College in Claremont, California, receiving a Bachelor of Arts degree in 1954. He earned a doctorate in physics from the University of California, Berkeley, in 1958, where he conducted research on elementary particles using Berkeley's electron synchrotron.

Prior to NSF
Knapp joined the Los Alamos Scientific Laboratory (LASL) in New Mexico in 1958, where he began his distinguished career. In 1971, he became Associate Division Leader for the Medium Energy Physics Division.

He contributed to the establishment of the Clinton P. Anderson Meson Physics Facility (LAMPF), a high-current accelerator that opened new opportunities in multiple areas including nuclear physics research and radiotherapy. Upon completion of the biomedical wing of the facility in 1972, Knapp participated in a collaborative program to explore the utility of negative pions in radiotherapy. These are heavy ionizing particles that could offer greater selectivity in cancer treatment.

Knapp established the Accelerator Technology Division at LASL in 1976 and was promoted to division leader in 1978. He was a guest scientist in 1978 in the USA-USSR Exchange program in Fundamental Properties of Matter and in 1979 in the US-Japan Cooperative Cancer Research Program.

Director of NSF
Knapp's assumption of duty as NSF director was marked early on by controversy, as he immediately asked for the resignations of three assistant directors, previously appointed by former president Jimmy Carter. Fears in the scientific community of political control and intervention were allayed, however, as he declared his intent to support strong basic research, rebuild precollege science education programs at NSF, increase support for undergraduate science education and promote international research collaboration.

Knapp established the first NSF young faculty fellowship program in 1983. The Presidential Young Investigator (PYI) program provided funding to promising young tenure-track faculty to support their research for five years. The goal of PYI was to improve capacity of higher institutions to produce highly qualified scientists and engineers for academic and industrial research, and to encourage research partnerships between young faculty and the private sector.

In 1982, in collaboration with the Department of Defense, NSF convened a panel of experts, chaired by Peter D. Lax of the National Science Board, to assess the needs for large-scale computing in the country. In its report of December 1982, the panel recommended that a program be established "to stimulate exploratory development and expanded use of advanced computer technology" with the objective of establishing supercomputer networks that linked academic, government and private-sector scientists and engineers. This laid the foundation for the establishment in 1985 of the NSF supercomputer centers.

Another significant accomplishment during Knapp's tenure as NSF director was the launch of the Engineering Research Centers (ERC). In February 1984, NSF convened a panel of the National Academy of Engineering to advise on the organization and mode of operation of the ERCs. In its report to Knapp, the panel described its vision of the ERCs as entities conducting research across disciplines of science and engineering toward the goal of greater competitiveness of U.S. industry, while educating engineers at all levels. The report established the foundation for the ERC program with the first generation of centers launched in 1985.

Post-NSF
Knapp returned to LASL in late 1984, citing his desire to remain a researcher rather than an administrator as the main reason for leaving NSF. From 1985 to 1989, he was president of Universities Research Association Inc., a consortium of universities that operate certain national research facilities including Fermilab. From 1989 to 1991, he served as director of LAMPF and from 1991 to 1995 as president of the Santa Fe Institute, a private organization that promotes interdisciplinary research.