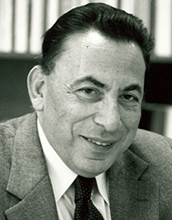 "Above all, the NSF needs to be alert to the changes that affect the country's competitiveness, the innovations that will be the breakthrough of tomorrow -- and must support these ideas, no matter their origin, in a timely manner and with ample resources, if it is to make a difference."


On Aug. 6, 1984, the U.S. Senate confirmed President Ronald Reagan's appointment of Mr. Erich Bloch as the eighth director of the National Science Foundation (NSF). Bloch, the first NSF director with industrial research and no academic background, believed NSF-supported research must be linked to economic development. He saw research as a highly competitive field and "no more international than commerce."

Bloch was the second of only two directors to serve a full six-year term as NSF director. During his term, the agency transitioned from supporting only purely academic research to including applied research in its portfolio. His strong advocacy for research as an important activity for maintaining national competitiveness led to an increase in government funding to the NSF from $1.3 to $2 billion during his tenure.

Bloch was born on Jan. 9, 1925 in Sulzburg, Germany. He lost his parents during the Holocaust and survived World War II in a home for young refugees in Switzerland. He studied electrical engineering for 2 years at the Swiss Federal Institute of Technology (ETH Zurich) before emigrating to the U.S. in 1948. He continued his studies in electrical engineering at the University of Buffalo, now the State University of New York at Buffalo, and obtained a bachelor's degree in 1952.

After graduation, Bloch joined IBM as an electrical engineer in the company's Poughkeepsie, New York, laboratory and later became engineering manager of the IBM 7030 supercomputer. In 1962, he led the Solid Logic Technology program team in developing the microelectronic technology used in the IBM System/360 supercomputer. System/360, announced in 1964, was the first mainframe computer built with the 8-bit architecture that revolutionized the computer and data processing industry. Bloch received a National Technology Medal in 1985 for his contribution to this innovation.

Bloch became general manager of IBM's East Fishkill, New York, facility in 1975 and a year later, vice president of the Data Systems Division. In 1981, he assumed responsibility as head of the corporate technical personnel development staff and was subsequently named corporate vice president of IBM.

As director of NSF, Bloch eschewed what he viewed as a false dichotomy between science and technology and urged a full integration of science and engineering (S&E) research at NSF. He argued that the agency's emphasis on research ideas generated by individual investigators had left the agency unresponsive to national goals. Bloch reasoned that multidisciplinary research would yield transformative discoveries and strengthen national economic competitiveness. To this end, NSF established Engineering Research Centers in several universities and Science and Technology Centers (STCs) or Integrative Partnerships to promote multidisciplinary research.

STCs involve diverse S&E disciplines from academic institutions, partnering with national laboratories and industry to integrate education and research toward development of novel technologies. The ultimate objective of the STCs is to invent and spin off new technologies into businesses while also producing science and engineering graduates.

To emphasize computer science, Bloch consolidated existing computer science programs housed in disparate areas of NSF -- such as engineering, economics and mathematics -- into a new Computer and Information Science and Engineering Directorate (CISE) with a mission to uphold the nation's leadership in computer science. CISE funded the establishment of five supercomputer centers around the country and in 1986 linked them to create a wide area network, the NSFNET, which enabled scientists and engineers to access supercomputing capacity across the country. The NSFNET served as the original backbone and progenitor of the modern internet.

Bloch also initiated a revision of the NSF merit review, a rigorous peer-review system for evaluating, ranking and selecting research grant applications for NSF support. While this system was the global gold-standard for reviewing research proposals, it was generally deemed too conservative and risk-averse. Bloch proposed a modification that would enable support of promising research, considered high risk by the merit review, with small and time-limited grants, at the discretion of the program manager. This idea eventually resulted in the Small Grant for Exploratory Research (SGER) program. SGERs support preliminary research on untested and risky ideas or those involving severe urgency.

After leaving NSF in 1990, Bloch joined the Council on Competitiveness in Washington, D.C., as its first Distinguished Fellow and became a Distinguished Visiting Professor at George Mason University in Fairfax, Virginia. For his contributions to the advancement of science and technology, he was honored by the National Science Board in 2002 with the prestigious Vannevar Bush Award. Erich Bloch passed away on Nov. 25, 2016 at the age of 91.