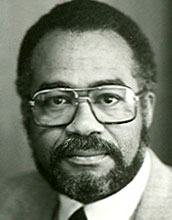 “The challenge to the foundation is to create a flexible structure that can accommodate creativity in both the search for new knowledge and the seizing of exciting and useful opportunities to apply it. This is not something we expect to do by the mere shifting of organizational boxes or reallocation of dollars. It involves a subtle but fundamentally significant broadening of perspectives on the part of those throughout the science and engineering communities who have been accustomed to think in terms of science versus engineering or basic versus applied research.”


Dr. John Brooks Slaughter served as the 6th director of the National Science Foundation (NSF) from December 1980 to October 1982. Slaughter, the first African American to be appointed as NSF director, was a strong advocate for the inclusion of women and minorities in science and engineering. He frequently expressed concern about the âstagnation that appears to have occurred in science educationâ and stressed engineering education and support for minorities and women in science as important priorities.

Prior to his appointment as director, Slaughter served (1977 to 1979) under NSF Director Dr. Richard Atkinson as Assistant Director for the Astronomical, Atmospheric, Earth and Ocean Sciences directorate. He considered this service to have been âa tremendous learning experience.â

Slaughter attended an all-black elementary school in then racially segregated Topeka, Kansas, but later attended a racially-mixed high school. He developed a keen interest in electrical engineering at an early age and built electronic devices as a hobby. He transformed this hobby into a radio repair shop when he was in high school, a home-business that helped finance his higher education.

Slaughter took his first position in 1956 as Electrical Engineer with General Dynamics Corporation and moved to San Diego in 1960 to become Head of Information Systems Technology at the U.S. Navy Electronics Laboratory. In 1975, he accepted an offer from the University of Washington as Director of the Applied Physics Laboratory and Professor of Electrical Engineering. He held this position until 1977 when he joined NSF as an Assistant Director. Slaughter returned to academia in 1979 as Academic Vice President and Provost at Washington State University. He was in this position for about a year when he received a call from President Jimmy Carter, urging him to accept the nomination as Director of NSF.

Slaughter assumed the position as NSF director as outgoing President Carter signed into law an appropriations bill for NSF that provided support for bringing women and minorities into full participation in science and engineering. Despite this positive start for the new director, Slaughter immediately faced a major crisis. The administration of newly elected President Ronald Reagan directed NSF to terminate support for science education as well as the behavioral and social sciences programs.

As generally expected of the NSF director, Slaughter was to defend the Presidentâs budget at the annual authorization hearing of the Subcommittee on Science, Research and Technology of the House Science and Technology Committee. Slaughter instead made the daring decision to disagree publicly with the administrationâs directive by emphasizing the need for NSF to continue support for science education and the social sciences. “It satisfied me that I had been honest,” he said in a 2007 interview. “It also indicated to me that my time at NSF was going to be shortâ¦I could not support the Presidentâs request.” Except for graduate fellowships, which the agency continued to award, the NSF budget supporting science education was terminated, along with support for the social sciences.

Slaughter considered these budget cuts an opportunity for creative reorganization that would enable continued support for the affected areas. This was accomplished by eliminating the Directorate for Science and Engineering Education and replacing it with the Office of Scientific and Engineering Personnel and Education. This recasting enabled NSF to remain engaged in Science Education as well as minority inclusion efforts.

Slaughter also believed that engineering needed to receive more attention than it did and that its increased visibility and expanded role, as a scientific endeavor, would be an asset to NSF and the nation. He built on earlier focus on this issue and groundwork laid by his predecessors to propose, develop and establish the Engineering Directorate.

Another major concern for Slaughter was what he perceived as a poor relationship between NSF and scientists from predominantly minority institutions. He noted that these scientists believed there was a presumption on the part of NSF that their research did not measure up to research from predominantly white universities. Slaughter therefore actively worked to encourage submission of research proposals from historically black colleges and universities. He visited several of these institutions to present the values of NSF. “There had grown a sense of alienation that needed to be addressed” he said in the 2007 interview.

Slaughter left NSF in 1982 to become Chancellor of the University of Maryland, College Park, where he served until 1988, when he became President of Occidental College, the first black person to hold that position in the 100-year history of the college. He left Occidental in 1999 to become the R. Melbo Professor of Leadership in Education at the University of California, Irvine. In 2000, he accepted an offer as President and CEO of the National Action Council for Minorities in Engineering, Inc., an organization that inspires excellence in engineering education for women and minorities. Slaughter currently holds a joint appointment as Professor of education and engineering at University of Southern Californiaâs Rossier School of Education and Viterbi School of Engineering.