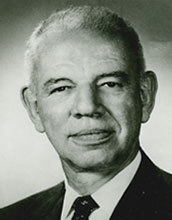 The second director of the National Science Foundation (NSF) served one full term from July 1963 through June 1969. According to Leland Haworth's biographers, his "traits of objectivity, attention to detail and sensitivity to the problems and concerns of others" were what made him such an influential science administrator. Staff who worked under him thought that the "key to the man's character was integrity."

After earning his A.B. and A.M. from Indiana University, Haworth received his Ph.D. in Physics from the University of Wisconsin in 1931. He began teaching at Wisconsin, where he remained until 1937, when he received a fellowship at the Massachusetts Institute of Technology (MIT). The following year he moved to the University of Illinois, where he officially remained until 1947, although he spent World War II at the MIT Radiation Laboratory doing research on airborne interception radar. He left Illinois to become assistant director at the Brookhaven National Laboratory, and in October 1948, became director. President John F. Kennedy appointed him a member of the Atomic Energy Commission in 1961.

Although continuing many of the priorities of NSF's first director, Alan T. Waterman, Haworth took the first major steps to increase NSF's role in applied research and technology. During his tenure, the NSF budget rose to a peak of over $505 million in fiscal year 1968. The following year, however, the impacts of the war in Vietnam and the costs of the Great Society took their toll on the NSF budget, and funding was reduced to $433 million, the first such reduction in the history of the NSF.