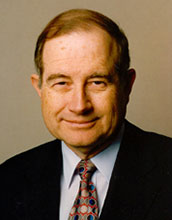 "We in the science and engineering community know that we can no longer expect to plan the full research agenda solely within the circle of our own community. On the other hand, planning the science agenda without the active participation of scientists and engineers will create disappointing results all around. Thus, the role of the civic scientist becomes a critical and integral part of developing a new science agenda for a post-Cold War world."


Dr. Neal F. Lane served as the 10th director of the National Science Foundation (NSF) from October 1993 to August 1998. A physicist and strong supporter of improving communication between the scientific community and the general public, Lane encouraged scientists to create dialogue with fellow citizens about the importance of science and its ability to meet various social needs. Lane assumed the NSF directorship already well-versed in the inner-workings of the agency, having served as assistant director of NSF's Division of Physics from 1979 to 1980 and as a participant in several NSF advisory panels.

During his five-year tenure as NSF director, Lane oversaw the establishment of new programs designed to integrate research and education, the creation of an agency-wide effort to harness the power of emerging technologies such as the internet and supercomputing for science and education, and a substantial increase in funds for modernizing scientific research equipment and infrastructure.

Lane earned his bachelor's, master's, and doctoral degrees from the University of Oklahoma. After completing his Ph.D. in 1964, Lane received an NSF Postdoctoral Fellowship to study at Queens University in Belfast, Northern Ireland for a year. In 1965, Lane continued his research in theoretical atomic and molecular physics at the University of Colorado Boulder's Joint Institute for Laboratory Astrophysics (JILA) as a visiting fellow.

After a year at JILA, Lane joined the Physics Department faculty at Rice University. In 1967, Lane took a leave of absence from Rice to conduct research at Oxford University as an Alfred P. Sloan Foundation Fellow. In 1979, after being promoted to Professor of Physics, Space Physics, and Astronomy at Rice, Lane took a second leave of absence to serve for a year as director of the Division of Physics at NSF. Lane remained at Rice until 1984, when he accepted a position as chancellor at CU Boulder. In 1986, after two years at CU Boulder, Lane returned to Rice as provost, a position he held until his appointment as NSF director in 1993.

During his time at Rice and CU Boulder, Lane held numerous leadership positions within the scientific community and received several teaching awards. An active member of the American Physical Society (APS), Lane chaired the APS Division of Electron and Atomic Physics from 1977 to 1978 and served on the Executive and Finance Committees from 1981 to 1983. He served on the National Research Council's Committee on Atomic and Molecular Sciences from 1980 to 1984 and chaired the NSF Advisory Panel on Advanced Scientific Computing from 1984 to 1986. Recognized for his teaching excellence at Rice, Lane received the George R. Brown Prize for Superior Teaching in 1973 and 1976.

On Oct. 15, 1993, Lane was sworn in as NSF director during a period of transition for the agency. Growing concerns over the ballooning federal deficit called into question Cold War-era justifications for the urgency of federal support for basic scientific research. As director, Lane played a vital role in defending the agency against projected budget cuts by emphasizing the importance of NSF-funded science in strengthening the American economy and securing global leadership. Through his leadership and communication of the benefits of scientific discovery to wider audiences, NSF refined its merit review process for funding grant proposals by adding two new criteria: intellectual merit and broader impact.

Concerned with how best to educate and prepare students to face the challenges of a rapidly changing scientific and technological landscape, Lane directed funds toward agency programs designed to immerse students in a "discovery-rich environment" through integrating education and research. Lane increased funds for the Research Experiences for Undergraduates program and the Grant Opportunities for Academic Liaison with Industry program (GOALI), which granted opportunities for graduate students and post-docs to work in industrial settings. In 1998, NSF launched a new program called Integrative Graduate Education and Research Training (IGERT) aimed at broadening graduate education in science and engineering (S&E) by funding students to study in multidisciplinary settings with opportunities for collaboration with industry researchers.

Lane also initiated an NSF-wide venture known as Knowledge and Distributed Intelligence (KDI) to address the impacts of advances in computing power and networking tools on S&E research and to encourage and direct future innovations and applications. Cutting across all fields of research at NSF, KDI supported multidisciplinary approaches to studying knowledge-based networking, learning and intelligent systems, and new approaches to computation tools. KDI also provided funds for NSF's role in a federal, multi-agency effort to increase the speed and networking functionality of the internet known as the Next Generation Internet program.

Though his tenure as NSF director ended in 1998, Lane's work in directing federal science policy continued. From 1998 to 2001, Lane served as Assistant to the President for Science and Technology and director of the White House Office of Science and Technology Policy in President Bill Clinton's administration. In 2001, Lane returned to Rice after a distinguished career in federal service. He is currently a Senior Fellow in Science and Technology Policy at Rice University's Baker Institute of Public Policy and also holds the titles of Malcom Gillis University Professor Emeritus and Professor of Physics and Astronomy Emeritus. Lane has won numerous awards, including the NASA Distinguished Service Award (2000), the National Academy of Sciences Public Welfare Medal (2009), and the National Science Board's Vannevar Bush Award (2013).