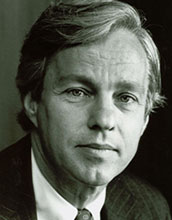 "We are living in one of history's most productive eras of intellectual discovery. From agriculture to medicine, from aerospace to computing, science is experiencing a series of revolutions that are remaking our idea of what is possible. These revolutions are occurring on the campuses and laboratories of research universities every day."


Dr. Richard C. Atkinson served as the fifth director of the National Science Foundation (NSF), from May 1977 to June 1980. Atkinson assumed the position of director already well versed in the challenges of leading the only federal agency dedicated to the support of basic research and education in all fields of science and engineering. He was the first director to have served as deputy director (from 1975 to 1976), and he also served as acting director from August 1976 to May 1977 upon the departure of Dr. Guyford Stever. As an internationally recognized experimental psychologist and applied mathematician, Atkinson was the first NSF director with a background in social science. In the face of vocal critics in Congress and the media, Atkinson defended NSF's commitment to basic research. During his tenure as director, he negotiated a historic scientific exchange between the United States and the People's Republic of China and strengthened NSF's peer review process.

Atkinson earned his undergraduate degree from the University of Chicago in 1948 and his Ph.D. in Psychology from Indiana University in 1955. After serving in the U.S. Army, Atkinson joined the faculty at Stanford University in 1956.

In 1957, after a year of lecturing in the Applied Mathematics and Statistics Laboratories at Stanford, Atkinson joined the University of California, Los Angeles Psychology Department. From 1961 to 1980, he served on the faculty at Stanford in the Department of Psychology. Atkinson's research on mathematical models of human memory and cognition gained him international recognition and led to the development of computer-controlled instructional systems aimed at addressing problems of learning in the classroom. Atkinson's innovative research also led to joint faculty appointments in Stanford's School of Engineering, School of Education, and Institute for Mathematical Studies in the Social Sciences.

While at Stanford, Atkinson held various academic and professional leadership positions. From 1961 to 1975, Atkinson served as associate director of the Institute for Mathematical Studies in the Social Sciences and from 1968 to 1973 as chairman of Stanford's Department of Psychology. Among other positions, Atkinson served as editor of the Journal of Mathematical Psychology (1963 to 1970), on the editorial board of Psychological Review (1966 to 1968), on the board of directors of the American Psychological Association (1973 to 1976), and as president of the American Psychological Association's Division of Experimental Psychology (1974 to 1975).

In 1975, President Gerald Ford appointed Atkinson as deputy director of the National Science Foundation. A year later, in 1976, President Jimmy Carter appointed him to the position of NSF director. Atkinson served as acting director until in May 1977 he was confirmed as director by the Senate.

As Director, Atkinson presided over NSF's first $1 billion annual budget. His tenure at NSF began in the midst of controversy and public criticism of various foundation-funded research projects and education curricula (such as "Man: A Course of Study"). At a time when the foundation was under heightened scrutiny, Atkinson did much to improve NSF relations with Congress and strengthen the process of peer review at NSF. His predecessor as director, H. Guyford Stever, later commended Atkinson for his leadership during this period, praising his "wide grasp of issues" and "breadth of knowledge."

Atkinson made history by negotiating the first memorandum of understanding between the United States and the People's Republic of China, which opened the door for major exchanges of scientists and scholars between the two nations. His efforts contributed to a comprehensive agreement between China and the United States on science and technology that was signed in January 1979 by Chairman Deng Xiaoping and President Carter.

Atkinson recognized that the clustering of research grants among the top universities negatively impacted the NSF's ability to gain broad support in Congress. Under Atkinson's leadership, NSF initiated a program aimed at broadening the geographical distribution of research grants. Established during his tenure and still in existence today, the Experimental Program to Stimulate Competitive Research (EPSCoR, known as "Established Program to Stimulate Competitive Research" as of January 2017) provided a framework for helping universities in states that received few research grants by providing them with advice about developing more competitive grant applications.

Atkinson has received many awards and honors throughout his distinguished career. In 1974, he was elected to the National Academy of Sciences, the American Academy of Arts and Sciences, and the National Academy of Education. In 1989, he served as president of the American Association for the Advancement of Science. In 2003, he won the National Science Board's prestigious Vannevar Bush Award, an award he established in 1980 during his tenure as director, for his lifetime contributions to the nation in science and technology. Atkinson also has the distinction of having a mountain in Antarctica named in his honor.