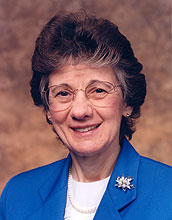 "Understanding our planet's systems -- and the interactions that shape them -- is an enormously complex task. It will take the combined efforts of biologists, ecologists, physical scientists, computer scientists, engineers and social scientists. Much of the research excitement today is at the boundaries of disciplines."


Dr. Rita R. Colwell served as the 11th director of the National Science Foundation (NSF) from August 1998 to February 2004. An internationally recognized expert on cholera and other infectious diseases, Colwell was the first woman to serve as director of NSF and was the first director in more than 25 years with training as a biologist. During her six-year tenure as director, she oversaw a 68 percent increase in NSF's budget, championed innovative science and engineering education programs, and increased funding devoted to advancing women in academic engineering and science careers.

Despite being cautioned by her high school teachers that science wasn't for women, Colwell embarked on a career in science out of, in her words, "sheer stubbornness." She earned a B.S. in bacteriology and an M.S. in genetics from Purdue University and a Ph.D. in oceanography from the University of Washington.

Colwell's distinguished academic career encompasses several tenured professorships, around 800 scientific publications as well as numerous books, and over a dozen leadership appointments to various government and academic advisory boards. After receiving her Ph.D. in 1961, Colwell served as a guest scientist at the National Research Council of Canada until 1963, when she joined the faculty at Georgetown University as a visiting assistant professor in the Biology Department. In 1964, Colwell was promoted to the rank of associate professor with tenure and, in 1972, left Georgetown to join the faculty at the University of Maryland as professor of microbiology.

Director of the NSF

In August 1998, Colwell was sworn in as director of the National Science Foundation. As director, she brought her interests in interdisciplinary research, biocomplexity and pre-collegiate education to bear on the direction of the NSF.

Colwell saw the agency's budget increase by 68 percent during her tenure as director. She directed the increased funding toward a variety of new programs designed to, as she described in one interview, "keep America preeminent at the frontier of research and education." In an effort to "raise the productivity of U.S. science and engineering," she also championed the increase of grant award sizes, which rose from an annual average of $90,000 in 1998 to $142,000 in 2005.

As director, Colwell promoted innovative research collaborations across traditional disciplines, such as biocomplexity in the environment, nanoscale science and engineering, and bioinformatics and information technology. She also directed increased funding toward starting new education programs. One such initiative was the widely praised "GK-12" program, which placed promising science and engineering graduate students directly in K-12 classrooms so that they might spread enthusiasm for science while also learning about the challenges of science education.

In 2001, Colwell oversaw the creation of NSF's ADVANCE program, which was established to increase the representation and advancement of women in academic engineering and science careers. ADVANCE supported women pursuing science careers through a variety of funding opportunities, including Fellow Awards designed to assist women during career leaves of absence to fulfill family obligations, Institutional Transformation Awards aimed at developing institutional procedures for encouraging women faculty to hold leadership roles, and Leadership Awards designed to recognize the efforts already made by institutions and individuals to encourage women in engineering and science careers. Before finishing her tenure as director, Colwell oversaw the doubling of funding for ADVANCE.

In 2004, at the close of her tenure as director, Colwell assumed the position of chairman of Canon U.S. Life Sciences, Inc. -- a biomedical company specializing in developing life-science solutions with applications in diagnostic and medical instrumentation. In 2004, she also joined the faculty of The John Hopkins Bloomberg School of Public Health and served as Distinguished University Professor at the University of Maryland -- a position she currently holds. In 2008, Colwell founded CosmosID, a bioinformatics company focused on microbial identification and pathogen diagnosis, which she currently chairs. In addition to being elected as a member of the National Academy of Sciences in 2000, Colwell has won numerous awards including the 2006 National Medal of Science and the 2010 Stockholm Water Prize. She currently serves on the National Institute of Standards and Technology's Visiting Committee on Advanced Technology (VCAT).