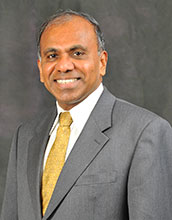 "We cannot sacrifice the future by responding only to the present. Knowledge from basic research always benefits society whether tomorrow, or in a decade. That is why scientists keep their eye on the farthest frontier. At NSF, we must continue to fund the most promising ideas across every field of science and engineering. We cannot be short-sighted and go after the latest fashion."


Dr. Subra Suresh served as the 13th director of the National Science Foundation (NSF) from October 2010 to March 2013. Suresh was the first Asian-born American to hold the position. During his tenure as NSF director, he emphasized the translation of basic research into commercial opportunities, collaborative research at the interface of scientific disciplines and across geographical boundaries, and the creation of favorable work environments for women scientists and engineers.

Suresh had his first formal association with NSF in 1985 at the age of 27, when he won the NSF Presidential Young Investigator Award, which supported his research for five years. At that time, he was the youngest member of the engineering faculty at Brown University.

Suresh attended high school in the small town of Kanchipuram, Tamil Nadu state, India. As required by the Indian education system, he pursued a one-year, pre-university training at the University of Madras before competing for admission into the Madras campus of the highly esteemed Indian Institutes of Technology (IIT).

Suresh graduated from IIT with a first-class degree in mechanical engineering in 1977 and from Iowa State University with a master's degree in 1979. He subsequently earned a doctorate in mechanical engineering at the Massachusetts Institute of Technology (MIT) in 1981, specializing in material sciences. Suresh then moved to Berkeley, California, for a two-year post-doctoral research fellowship at the University of California and Lawrence Berkeley National Laboratories.

Suresh joined the faculty of Brown University in 1983 and was promoted to full professor in 1989. During his tenure at Brown, he wrote the textbook "Fatigue of Materials," which became an authoritative reference in material science.

In 1993, Suresh returned to MIT as professor of material science and engineering (S&E) and was appointed department head in 2000. He collaborated with Dr. Ares Rosakis of the Graduate Aerospace Laboratories of the California Institute of Technology to start Oraxion Diagnostics in 2004. Oraxion, a vendor of process control metrology systems for the semiconductor industry, was later acquired by Ultratech.

In 2007, he became the Vannevar Bush Professor of Engineering and dean of the School of Engineering. Under his leadership, MIT created new nanotechnology centers and opened them to other disciplines. It was during this time that Suresh explored research at the interface of the sciences. He collaborated in the application of material science and physics to cell biology and parasitology. The research led to the deciphering of the role of a malaria parasite protein in inducing structural changes in parasite-infected red blood cells and affecting microcirculation.

In 2006, Suresh pursued his interest in international collaborative research by leading the MIT team that negotiated with the government of Singapore to establish the Singapore-MIT Alliance for Research and Technology (SMART). The SMART center in Singapore was MIT's first major research center outside the U.S.

As Suresh assumed the directorship of NSF, Congress was trimming government spending overall and scaling back the level of President Barack Obama's funding request for NSF. However, Suresh introduced bold programs that were remarkable for their low cost.

Suresh believed, for example, that with relatively small amounts of funding, results of basic research could be pushed beyond publications to create economic value. He therefore set up I-Corps, a program to identify opportunities for commercializing results of NSF-funded research, achieved through entrepreneurship training, formation of networks and award of seed funding for start-ups.

Suresh leveraged the stature of NSF to convene the Global Summit on Merit Review in May 2012 at NSF headquarters in Arlington, Virginia, an event that led to the launch of the Global Research Council (GRC), a virtual organization of heads of S&E research funding agencies from more than 50 countries. GRC was formed to foster collaboration, communication and data-sharing among countries large and small to support scientific advancement globally.

Following his belief in promoting research at the interface of scientific disciplines, Suresh established a new NSF program, Integrated NSF Support Promoting Interdisciplinary Research and Education (INSPIRE), in 2012. The objective of INSPIRE is to support ideas generated by the scientific community that do not fit the mold of NSF's discipline-based organizational structure. INSPIRE-funded ideas cut across at least two NSF directorates and are jointly funded by the relevant directorates and the office of the director.

Under Suresh, NSF embarked on a bold initiative, Career-Life Balance (CLB), aimed at increasing the number of doctoral-level women in the S&E workforce from 26 percent in 2011 to 40 percent by 2021. CLB was formally launched at the White House in September 2011, with the participation of First Lady Michelle Obama, to formulate and introduce gender-neutral policies that would support the retention of women scientists and engineers in research.

Suresh left NSF to become president of Carnegie Mellon University (CMU) in July 2013. At CMU, he introduced the largest infrastructure development program and had the most successful fundraising years in the history of the university. Under his leadership, CMU recruited the highest percentage of women first-year students in computer S&E, several fold higher than the national average.