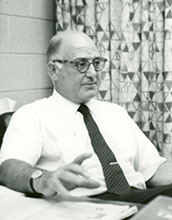 The third director of the National Science Foundation (NSF) was the first biologist and the first not to complete his full term. William McElroy served from July 1969 through January 1972, although he announced his intent to depart in July 1971. Colleagues praised his ability to communicate with laymen, including politicians, about the value of science. He was also known for his ability "to admit when he is wrong."

He received his B.A from Stanford University in 1939, his masters in Biology from Reed College in 1941 and his Ph.D. from Princeton University in 1943. After graduation, McElroy worked for the Office of Scientific Research and Development. In 1945, he had a postdoctoral fellowship at Stanford. The following year he joined the faculty at Johns Hopkins University, where he remained until coming to NSF. His research at Hopkins focused on luminescent organisms and he was known for his work on the biochemistry of fireflies.

McElroy was a controversial director. Unlike his predecessors, he was an aggressive lobbyist for NSF and for science in general. During his short term as director, he managed to increase NSF's budget by almost 50 percent. Much of the increase, however, was in support of large-scale applied research, including the program Research Applied to National Needs (RANN). Some felt he was radically changing the thrust of the foundation. Also controversial was his decision to bring in professional administrators from the National Aeronautics and Space Administration.