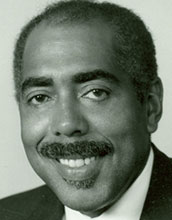 "Although it sometimes appears to be dèjá vu all over again, the NSF and the nation have learned from the past and the NSF is remarkably resilient and adaptable. Its commitment to a set of core principles -- excellence above all, listening to and taking directions from practitioners not just bureaucrats and continually renewing itself, bringing in fresh talent to the organization and to the fields it supports -- will sustain it in the future."


Dr. Walter E. Massey was appointed the ninth director of the National Science Foundation (NSF) by President George H. W. Bush in 1991, the 40th anniversary year of the foundation. He served from March of that year to April 1993. Massey strongly believed in improving the quality of science education and boosting the amount of technical and scientific education at all levels, especially for minorities and women. He challenged NSF to support the exploration of the best methods of teaching science, not only at the graduate level, but also from K-12 through undergraduate education.

Massey had affiliations with the NSF before becoming director. He was a recipient of an NSF grant in science education during his academic career and served on three NSF advisory committees: Physics, Science and Engineering, and International Programs. Massey became a member of the National Science Board in 1978 and served until 1984.

Massey was born on April 5, 1938 in then racially segregated Hattiesburg, Mississippi. While in 10th grade, Massey passed an early entry examination for Morehouse College and began his college education at the age of 16 with a Ford Foundation fellowship. He obtained a Bachelor of Science degree in 1958 and a doctorate in physics from Washington University, St. Louis in 1966. He pursued post-doctoral training in theoretical physics from 1966 to 1968 at the University of Chicago-affiliated Argonne National Laboratories.

In 1968, Massey was appointed assistant professor of physics at the University of Illinois Urbana-Champaign (UIUC). As one of four blacks on a faculty of more than 5,000, Massey felt a strong need to promote science education for minorities, and he actively engaged in the recruitment, tutoring and counseling of black students at the university.

He left UIC in 1970 to join Brown University as an associate professor and was promoted to full professor in 1975. While at Brown, Massey established the Inner-City Teachers of Science program (ICTOS) in Providence, Rhode Island, supported by NSF funding. The mission of ICTOS was to train inner-city science teachers in the latest methods of science education as an approach to promoting science in minority high schools.

In 1979, Massey returned to Argonne National Laboratories as its sixth director, with a joint appointment as professor of physics at the University of Chicago. This was a time in which Argonne's mission as a nuclear energy research facility was facing severe skepticism due to the partial meltdown at the Three Mile Island nuclear power plant on March 28 of that year. Massey worked against odds to restore funding for nuclear energy research and re-branded Argonne as a visionary scientific research institution.

Immediately following the directorship of NSF, Massey advised the National Science Board (NSB) to set up a commission to consider the future of NSF in the face of a changing world. The NSB accordingly set up a 15-member Commission on the Future of the National Science Foundation, which on Nov. 20, 1992, issued a report entitled "A Foundation for the 21st Century: A Progressive Framework for the National Science Foundation." The report reaffirmed the primary mission of NSF to support first rate research initiated by individuals in the scientific community to probe the frontiers of science in the search for new knowledge. It also advised that resources be deployed toward "strategic areas in response to scientific opportunities that meet national goals." The report concluded that the NSB must work with the private and public sectors to formulate a national science and technology roadmap.

Another one of Massey's notable achievements was the establishment of the Directorate for Social, Behavioral and Economic Sciences (SBE). SBE supports basic research on human behavior and social organizations and how social, economic, political, cultural, and environmental forces affect the lives of people from birth to old age and how people in turn shape those forces. The premise for Massey's support of this area of research is that novel insights into developmental sciences can lead, among other things, to new approaches toward child education and development.

Massey was also instrumental in the development of the advanced Laser Interferometer Gravitational Wave Observatory (LIGO), which enabled scientists to record for the first time in February 2016 the existence of gravitational waves as predicted 100 years earlier by Einstein's general theory of relativity. Work on LIGO began in 1980. Requests for adequate funding for LIGO were, however, routinely rejected throughout the 1980s, amid lingering doubts about its technical feasibility and administrative organization. It was not until 1992, during Massey's tenure as NSF director, that adequate funding was approved for the project, leading to its eventual success.

Massey left NSF in 1993 to serve as provost and vice president for the 10-campus University of California system, where he remained until 1995, when he returned to his alma mater, Morehouse College, as president. In 2010, he joined the School of the Arts Institute of Chicago as President and is currently its chancellor.