What one scientist calls the world’s weirdest telescope was built to detect high-energy particles, not the light from distant stars. In 1997, AMANDA recorded the first precise map of neutrinos from outer space as they zipped through Antarctic ice. 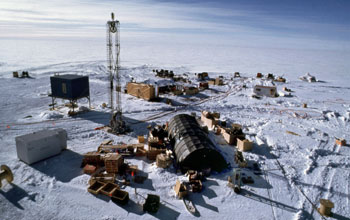 Many cosmic phenomena of interest, such as supernovae (the death explosions of large stars), produce elusive, nearly massless particles called neutrinos in addition to various wavelengths of light. So a neutrino detector can act as a telescope, identifying the source of neutrinos just as optical telescopes focus on a source of light.

The South Pole is a strikingly inhospitable place to build and operate a telescope. But ice also happens to be an excellent medium for observing neutrinos as they pass through the Earth. Since 1990, astrophysicists from the University of Wisconsin (UW) have led a collaboration of scientific institutions to construct a prototype neutrino telescope, with $8.5 million in funding from the National Science Foundation and support from additional U.S. and international contributors. After field tests of drilling techniques and sensor technology in Greenland, the team deployed the Antarctic Muon and Neutrino Detector Array (AMANDA) under Antarctic ice.

The instrument has been described by Scientific American as one of the "seven wonders of modern astronomy." As UW astrophysicist Albrecht Karle told The Antarctic Sun [a newspaper published at McMurdo Station, Antarctica] it is "the weirdest telescope in the world."

AMANDA consists of strings of basketball-sized optical devices frozen vertically in holes drilled as deep as 2,000 meters (1.2 miles) into the ice. Unlike traditional telescopes that bring distant objects into view via reflected or refracted light, AMANDA uses a subterranean array of photomultiplier tubes to indirectly detect elusive neutrinos.

"We call them poltergeist particles because they are so ethereal," Steven Barwick told the Sun. Barwick is a physicist at the University of California-Irvine and part of the design team for the original AMANDA detector.

Neutrinos are invisible, fast-moving, subatomic particles that have no charge and almost no mass. Our own sun constantly throws off low-energy neutrinos -- products of thermonuclear reactions in the sun’s core. But it's the high-energy neutrinos reaching us from deep space that fascinate AMANDA researchers. The particles are unique messengers: They have the ability to race across the universe unchanged since they were first propelled into space by high-energy events.

But how can astrophysicists glimpse something that's almost impossible to detect, much less learn more about it? Fortunately, neutrinos reveal themselves when they collide with protons. These rare collisions create a charged particle, a muon, which yields a distinctive blue flash as it passes through a transparent medium such as water or ice. Sensors deployed in Antarctic ice -- an environment that offers a dark, transparent viewing zone -- can detect the blue flashes, enabling researchers to retrace the path of the neutrinos through space. The AMANDA photomultipliers detect light, convert it into electrical signals, and send the data via a kilometer-long cable to a surface computer facility adjacent to the South Pole station.

Imagine a quiet lake encircled by a regular arrangement of buoys. As a boat passes you can record when the bow wave reaches each buoy. Because you know exactly where the buoys are located, you can reconstruct the direction in which the boat is moving. In this analogy, the boat is a muon. The wave is the light the muon emits. The buoys are photomultipliers buried in the ice.

"It was the first concrete proof that AMANDA worked -- that it could help map the distant depths of space, thereby perhaps resolving some of the most heated controversies in physics," noted UW astrophysicist Francis Halzen in an essay about AMANDA. By tracing neutrinos back through space, researchers hope to determine the fundamental nature of distant energy sources and to better understand the Big Bang and other cosmic forces.

In recent years, adding more sensors to AMANDA has expanded the capability of the instrument. Even so, investigators would like more neutrino data to work with. AMANDA detects 7-10 muon-generating "hits" per day. To gather data more rapidly, astrophysicists and drilling specialists have begun a six-year project to construct a much larger neutrino detector called IceCube.

The IceCube Neutrino Detector will have more than 4,800 sensors deployed in 80 holes (compared to AMANDA's 670 sensors in 19 holes, originally) radiating from the South Pole site. Wisconsin's Halzen estimates that the new instrument will be able detect as many as 400 neutrinos a day.

Further gains in performance can be realized by burying the detectors deeper in the ice. While the AMANDA detectors are deployed roughly between 1,400 and 2,000 meters, IceCube's photomultipliers will be positioned between 1,450 and 2,550 meters. (AMANDA’s designers discovered that bubbles trapped in the ice above 1,400 meters interfere with neutrino detection – a problem that IceCube will solve by going deeper.)

Researchers have high expectations for IceCube: When completed, it will surround a cubic kilometer of deep ice with photomultipliers. "There's no such thing as having too big a neutrino detector," says UW astrophysics professor Bob Morse.

However, building it will be a challenge. The AMANDA drilling effort required designing, constructing, and transporting the world's largest hot-water drill to Antarctica -- tasks undertaken by lead drill engineer Bruce Koci of UW's Ice Core Drilling Services. But the deeper holes required for IceCube call for an even larger computer-controlled drill. Koci and his team have developed a more efficient drill that uses less fuel to heat the water needed for melting holes in the ice.

"We have the world's heaviest ice drill here and we’re looking for particles that don't weigh anything," said Koci in the Sun. He notes that UW's astrophysicists and drilling team share the same mindset for constructing IceCube: The holes must be precisely drilled to ensure accurate placement of the photomultipliers and reliable data collection. "It really is cutting edge science. That's what’s exciting about it," says Koci.

The IceCube collaboration includes 27 universities and institutes from the United States, Germany, Sweden, Belgium, Venezuela, Japan, the Netherlands, New Zealand, and the United Kingdom. An NSF award to the University of Wisconsin-Madison will cover most of IceCube’s $272 million cost. The project's international partners are contributing about $30 million, as well as hardware and trained personnel to analyze data transmitted by satellite from the South Pole.

It will take about six years to complete the drilling for IceCube and deploy its photomultipliers. The instrument should have an operational life of approximately 15 years.